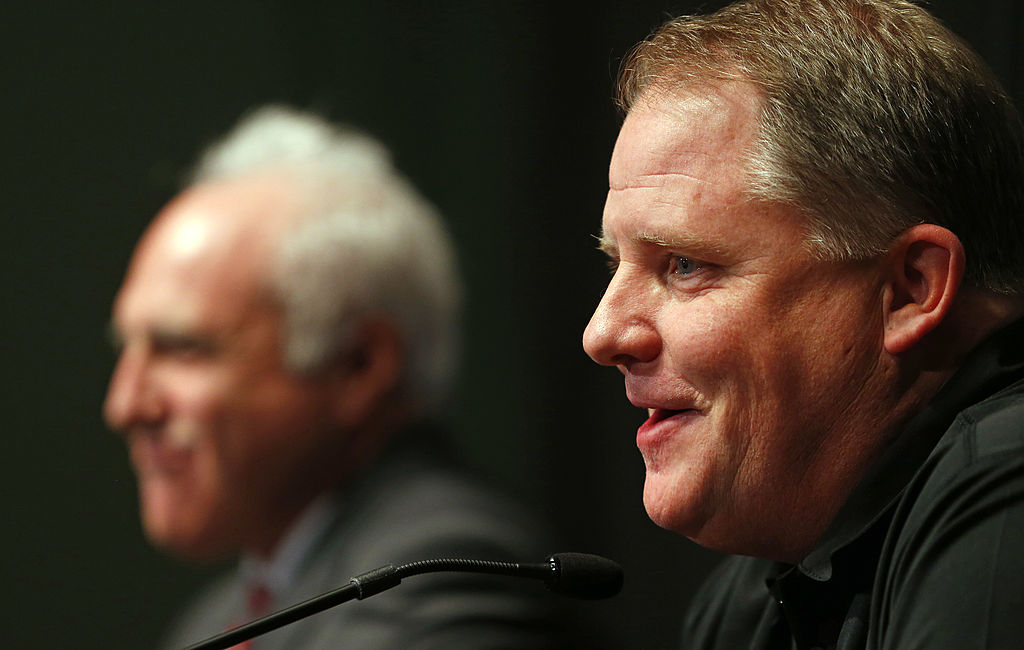 Some breakups are amicable. Andy Reid and the Philadelphia Eagles, for example, had a long marriage that ended with both sides mutually agreeing to separate. Eagles owner Jeffrey Lurie kept the house, while Reid took most of the kids.

Some breakups are, well, not amicable. Some breakups are horrible and angry and emotional. Chip Kelly and the same Philadelphia Eagles, for example, had about as bad a breakup as an NFL coach and team can have. Kelly was kicked out of town before the season even ended last year, and at his press conference explaining the decision, Lurie leveled Kelly, eschewing a bus to back up over his former coach for a steamroller in midnight green.

Now, with the NFL’s legal tampering window wide open in advance of the start of free agency, Lurie—and reinstated decision maker Howie Roseman, who was locked in a closet somewhere for the last year while Kelly ran the team—are throwing all of Kelly’s crap out on the lawn.

Reid was like a dependable spouse that Lurie—and Eagles fans—could rely on to provide for the family and treat everyone well but, by the time he left, the spark was long since gone.

Kelly was the NFL equivalent of mid-life crisis for Lurie. The super model in a sports car with the top down. (The car, not the model.) And much like a real mid-life crisis, Lurie’s rebound relationship was rife with bad decisions. He gave Kelly complete control of the roster after two 10-win seasons, only one of which ended in a playoff berth, and watched idly by as Kelly jettisoned top players to create a roster in his image.

The only problem: Kelly acquired players who didn’t perform, and he overpaid them to do so. Kelly moved in to Lurie’s house and before anyone could do anything about it, he sold all the furniture on Craigslist for pennies on the dollar and replaced it with cheap pleather couches and pastel shag.

Lurie neutered Roseman so Kelly could hang himself—the owner admitted as much in that steamroller of a presser—and now, less than one full year after giving control to Kelly, Roseman is back in charge and Kelly and his big ticket purchases are out of town, or on their way out as soon as the league let’s them.

DeMarco Murray is reportedly being shipped to the Tennessee Titans. Both Byron Maxwell and Kiko Alonso are off to Miami. Nobody even knows what Roseman got back in either deal, but everyone in Philadelphia is happy, and the Eagles at the very least save nearly $10 million cap space by getting rid of Kelly’s overpriced additions. This, from Ruben Frank of CSNPhilly.com:

The Eagles rid themselves of an underachieving and overpaid cornerback, a hobbled linebacker and a declining running back, they cleared about $9.84 million in cap space that will sure come in handy when it’s time to pay Fletcher Cox, they opened the door to re-signing Nolan Carroll, and they re-stocked the draft pick cupboard that had been gutted by Chipper.

All that’s left from Kelly’s signing spree a year ago are Sam Bradford, who just signed to a two-year extension, and Ryan Mathews, who should probably be expecting a phone call any minute now that he’s been shipped off to Siberia or somewhere.

So what’s left of the Kelly era? A few assistant coaches, a few draft picks and a smoothie machine.

What’s amazing about the Kelly era is how many players he let go who would have helped his style of play—DeSean Jackson, most prominently—because they weren’t his type of guy (a legitimate concern for any coach, to be fair) without bringing in enough talent to replace what was gone.

Kelly tried to draft depth at wide receiver, which was hit or miss in this first two years and looked foolish in his third after Jeremy Maclin left town to rejoin Reid in Kansas City. He thinned out the offensive line without replenishing it and one cut player, Evan Mathis, now has a Super Bowl ring, thanks to Kelly.

Shipping LeSean McCoy to Buffalo actually made a ton of sense given what he was about to get paid, and getting back Kiko Alonso would have been a boon to the defense had Alonso been anything close to the player he was as a rookie. Instead, Kelly traded away the franchise’s leading rusher and got back the worst player on the Eagles last season.

There was no doubt, given what was expected of him and what he produced, that Alonso was the worst player in Philadelphia.

Unless it was Murray.

Murray was signed as a luxury, the same day Kelly brought in Ryan Mathews to play running back, an immediate glut at the position McCoy vacated in the trade. Two for the price of one, it was billed, only neither lived up to expectations, and now Murray is on his way out of town, with rumors Mathews may follow.

What’s ironic, is that given Pederson’s offensive style, Murray is a much better fit with the Eagles now than he was under Kelly. And yet, the player is tethered to the coach, and much like Kelly had to cut or trade a bunch of Reid’s guys to decorate the house the way he wanted it, so too must Pederson, if only for the sake of change. And good taste.

So out with the shag carpet. Out with the pleather sofa and hideous tapestry prints of ducks all over the place (so…many….ducks).

Or perhaps the worst player was Maxwell, who signed a six-year $63 million deal with the Eagles last march, making him one of the five highest paid players at his position. From Zach Berman at Philly.com:

The former Seattle Seahawk was inconsistent in his lone season here, finishing with 64 tackles and two interceptions in 14 games as the team’s top cornerback. Maxwell was an upgrade over what the Eagles had at the position before he arrived and played well at times, but his contract made him a target for criticism.

Again, nobody has any idea who the Eagles will be able to sign in free agency, even with their newfound money. And while pundits are quick to laud Roseman for dealing Kelly’s junk to “gullible” teams, none of the terms have been disclosed, and nobody knows what kind of draft haul the Eagles will get back.

In that moment, Kelly went from a mastermind to a dunce, and after a preseason where fans thought the Eagles were a Super Bowl contender, the mistakes never seemed clearer than during the regular season, and things got worse for Kelly as the losses mounted.

Now, only Bradford has been re-signed—for a relatively team-friendly two-year deal that is surely nothing more than a stop gap until Pederson and Roseman can find their quarterback of the future—and almost all of the big-ticket players Kelly brought in are being sent back out for good.

How will Roseman and Pederson fare when all the deals are officially consummated on Wednesday? Surely better off, as everyone involved is looking at the situation with eyes wide open. Kelly is gone, and slowly but surely, his junk is gone too. The Eagles may not be a better team for a while, but at least things are going back to the way they were. For Lurie, the bad decisions are behind him, and the crisis is almost over.