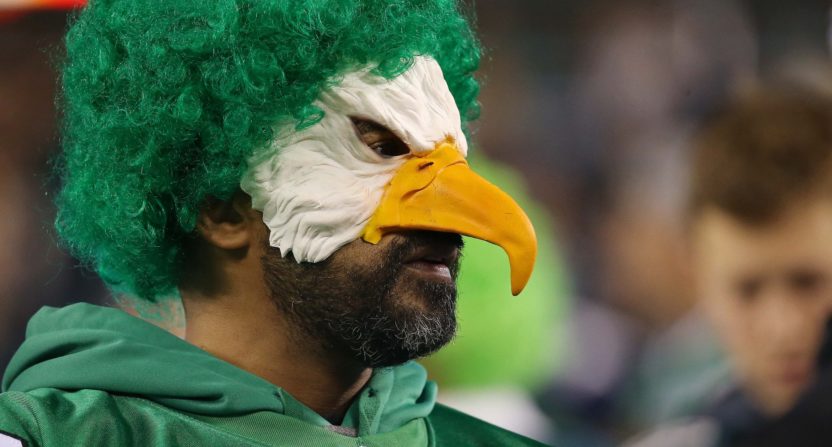 Philadelphia Eagles fans have, shall we say, a reputation. That reputation, which was on full display last weekend when their beloved franchise advanced to the Super Bowl for the first time since 2005, includes a tendency towards climbing public property, driving vehicles where they don’t belong, telling old women to F-off, and running headlong into walls in the name of celebration. It wasn’t all fun and games, though, as things got violent as well.

There’s a reason they felt the need to grease poles around town last Sunday.

Now, those same Philly fans are arriving in droves in Minneapolis for Super Bowl LII to watch their Eagles battle the mighty New England Patriots. If the Eagles win, expect to see chaos in the Philadelphia streets, but perhaps also in Minnesota as well. It’s also worth noting that the hometown Vikings were the team the Eagles defeated in order to make the Super Bowl, which adds some sour grape to the equation. With that in mind, you might not be surprised to learn that there’s been some hesitation on some people’s part to welcome Eagles fans with open arms.

Per one Eagles fan headed to Minneapolis for the big game, an Airbnb host had to tell their incoming guests that the local HOA had changed the rules on short-term rentals during the week of the Super Bowl out of fear of what Philly folks might do.

According to #Eagles @reddit, folks in #Minnesota are cancelling @Airbnb for @Eagles fans?! Have any of you been cancelled? #GrowAPairAlready pic.twitter.com/YfedvfhP23

Concerns started to spread on Reddit that this was part of a larger surge of last-minute cancellations meant to screw-over Philly travelers headed to town. So much so that Airbnb was forced to respond. Per Mashable, Airbnb told guests that the cancellation that fan experienced was an isolated incident and, in fact, reservations from Philadelphia-area guests are way up in the region.

Airbnb says there was a "massive surge" in bookings for the #SuperBowl in Minneapolis after Sunday's games. 500 bookings in two days. 15% from New England states. 18% from Pennsylvania, Delaware & New Jersey. #SBLII

Airbnb also told Mashable that “anything that resembles discrimination — even football discrimination —- would not be tolerated.” They said that any host who appeared to be discriminating against Eagles fans would be kicked off the platform.

Crisis averted. Though, let’s be clear that if you rented your place to someone from Philly and then canceled at the last second, you’re basically taking your life into your own hands. Remember, that reputation is well-earned.

Yeah, give a Philly fan your address, then cancel their reservation a week before the Super Bowl. Let me know how that works out for you. #FlyEagelsFly