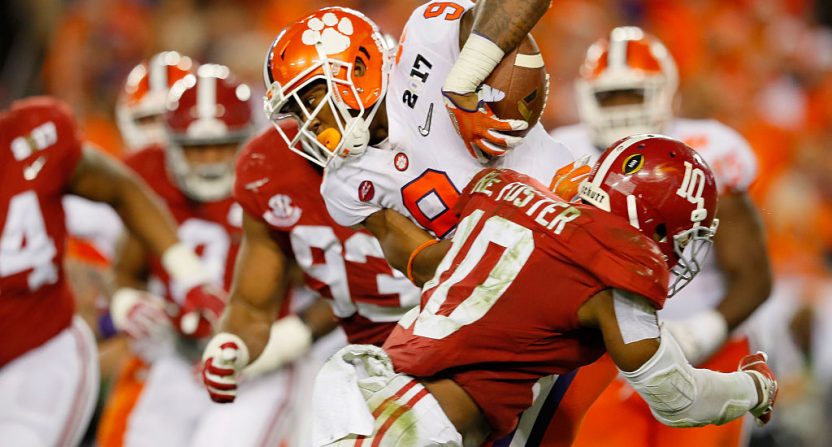 ESPN’s Adam Schefter reports that Alabama linebacker Reuben Foster has been sent home from the NFL Combine following a “heated” argument with a hospital worker:

Bama's Reuben Foster, a potential top-10 pick, is being sent home from combine for heated argument with a hospital worker, sources tell ESPN

All one NFL spokesman would say was that Reuben Foster was being sent home for "personal reasons" and did not want to comment any further.

Reuben Foster was scheduled to do team interviews tonight and team tests Saturday; now scheduled to fly home to Tuscaloosa on Saturday.

Bleacher Report’s Matt Miller is hearing that the incident happened on Thursdsay:

Moore and ESPN’s Katherine Terrell report that Foster also has had bad interviews this week:

Just heard interviews were bad for Foster this week. One scout said it was a bad week for him. https://t.co/4roByvCSlH

I was told by one team that Foster did not have a great interview. Not a good chain of events here.

So, the details right now are rather vague, but we can at least conclude that it hasn’t been a good week for Foster and his draft stock. The alleged incident with the hospital worker would be a big enough red flag, and then add in bad team interviews? And getting sent home from the Combine? Yikes.

Foster was a first-team All-American for the Crimson Tide last season, and won the Butkus Award which is given to the nation’s top linebacker. He had 115 tackles (13 for loss) and five sacks in 2016.

The 6’0″, 229-pounder has been widely considered the best inside linebacker in this draft class, and a potential top-10 pick.

It will be interesting to see if more details come out about the alleged incident with the hospital worker, and how much these recent events hurt Foster’s draft stock.