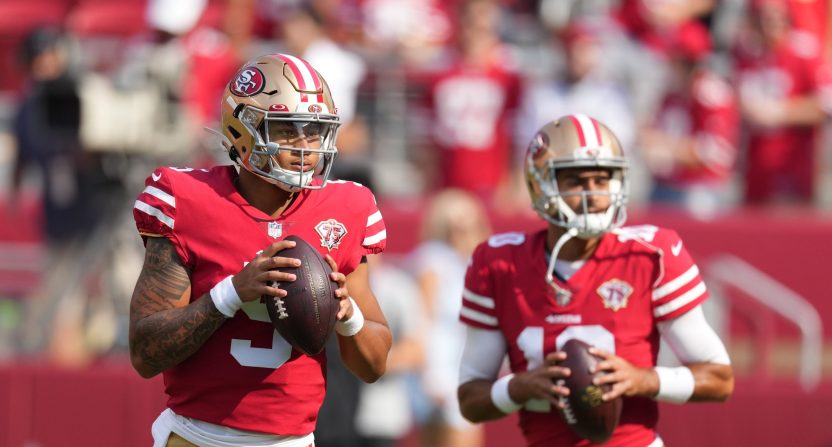 NFL reporter Albert Breer of The MMQB found himself in a bit of a controversy over comments he made about San Francisco 49ers quarterbacks Trey Lance and Jimmy Garoppolo.

Breer claimed that Lance was “annoyed” with the situation, which later Breer had to take back and clarify.

On Tuesday, Breer tweeted that the “wording might’ve been a little presumptive,” and added that he’s not “climbing in [Lance’s] head.”

Breer also changed the wording from “annoyed” to “complicated.”

Yeah, full disclosure, my wording might've been a little presumptive there. I'm not climbing in the guy's head. What I heard was it was complicated news to take, as you'd expect it would be, and again that was just in the immediate aftermath.

Interesting wording considering the fact that Lance seemed to be fine with the 49ers re-signing Garoppolo as their backup this season.

The two have a great relationship and Lance even said so last week.

“It was all love,” Lance recently said of his relationship with Garoppolo. “Nothing has changed between us. I can say it a million times; he’s been my big bro and nothing is going to change that. I know he’s got my back, I’ve got his back and I’m excited to go through this year with him.”

Reports are that Jimmy G. took less money to stay with the team and back up Lance, with Garoppolo a statement he didn’t want to “ruffle any feathers” and decided not to ask to be released.

Breer may be way out of bounds with this story, because at least from the outside looking in, things seem to be fine between the two quarterbacks.

“You guys probably wouldn’t even believe it, it was fun to have him around,” Lance said. “He’s a high-energy guy, in the huddle, outside of the huddle, in the locker room. whatever it is, he’s a great guy to have around and I’m super glad he’s back.”