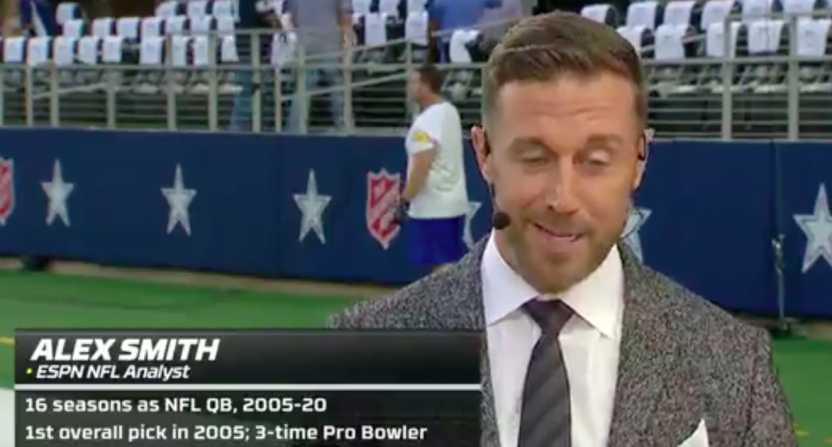 In recent weeks, we’ve seen a bunch of rookie quarterbacks get thrown to the wolves as they learn on the job in the NFL.

Mac Jones is doing okay so long as he doesn’t throw far, Trevor Lawrence is an interception machine in Jacksonville, Davis Mills was inconsistent in his first start in Houston, and Justin Fields just put together a terrible debut performance in Chicago (no thanks to his head coach).

Someone who knows a thing or two about rough debuts as a rookie quarterback is Alex Smith. Smith started his first game as a rookie with the San Francisco 49ers in 2005 against the Indianapolis Colts. While he’d done some spot duty here and there is a couple of games before this, it was a true “Welcome to the NFL” experience.  Smith went 9-of-23 for 74 yards and four interceptions while getting sacked five times. He finished the game with a QB rating of 8.5 and the Niners lost 28-3.

Smith, who joined ESPN as an NFL analyst for the 2021 season after retiring from the league, spoke about his experience during Monday Night Countdown and shared some illuminating insight into how he felt about being pushed into the spotlight so soon in his NFL career. In talking about the young quarterbacks who are dealing with similar issues now, Smith hopes that players will be able to take what they learn now and apply it to the rest of their careers.

Alex Smith: "My first (NFL) start was a disaster. I feel like I had no business being out there."

"I really feel like it set me back… it took me years to overcome." pic.twitter.com/q95BFp4rLx

“They’ll learn their mistakes and grow and develop. You know, as someone who experienced that, and I really felt like, it set me back…for years, it took me years to overcome. My first start was a disaster. I feel like I had no business being out there. I threw four interceptions in my first start. And it didn’t get much better after that.”

Smith also talked about Patrick Mahomes, who spent his rookie season on the bench backing up Smith in Kansas City. After a year of being mentored and learning the pro game, he felt like Mahomes had what he needed to come out and dominate the way he has.

Ultimately, Smith’s personal experience might inform the notion that all rookies should wait. Certainly, there’s a learning curve that comes with becoming a quality NFL quarterback. Even some of the all-time greats like Peyton Manning and Troy Aikman had pretty rough rookie stints. But perhaps those players benefitted from the experience in a way that players like Smith weren’t built for. Not that they are “better” but the introduction a player gets to the NFL likely matters based on a number of factors and isn’t a black or white scenario.

Still, it’s an honest thing for Smith to admit all these years later. And while injuries plagued his career in big ways, Smith did go on to throw for 35,650 yards and almost 200 touchdowns in spite of the very rough start.