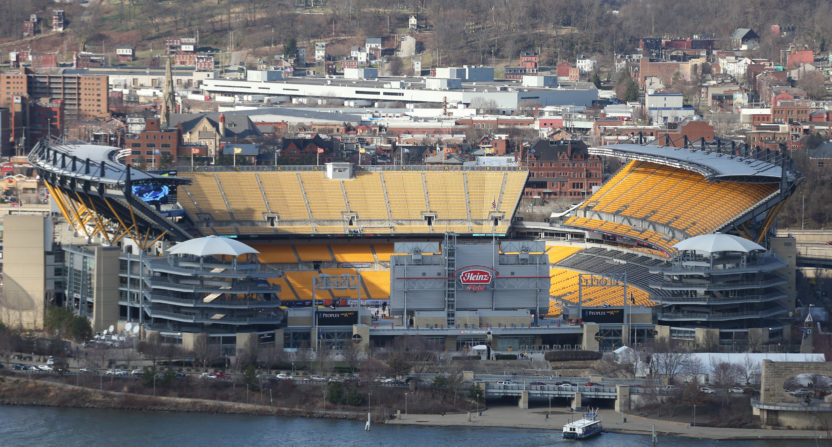 The original XFL was a football experiment back by the WWE’s Vince McMahon and NBC’s Dick Ebersol. Turns out, the reboot is going to be those two names battling it out for the NFL’s table scraps.

WWE owner and CEO Vince McMahon announced the revival of the XFL in January as a bizarro version of the original vision. Gone is the focus on skull-crushing hits and scantily clad cheerleaders while respecting the flag and excluding players with criminal records were the name of the game now. The vision McMahon laid out was a big picture one, with no concrete plans for which cities teams would play in, what networks the games would be broadcast on, and how the league would compensate for all the issues that plagued the original XFL. McMahon was clear, however, that play would begin in 2020.

That might end up being the XFL’s undoing before it even gets going once again. Charlie Ebersol, son of Dick Ebersol, announced Tuesday that his family is starting a new league of their own called the Alliance of American Football. Not only does the league come with lots of big-name backers (Peter Thiel’s Founders Fund, The Chernin Group) and executives (Bill Polian, Troy Polamalu, Hines Ward), but it also already has a TV network deal worked out with CBS and CBS Sports Network. Perhaps most damning of all to the XFL, plans call for the AAF to begin play in 2019.

As The Comeback’s Phillip Bupp pointed out, the AAF’s apparent goodwill with the NFL may be why it has a leg-up to succeed.

Where the XFL has more of a “Screw you” mentality toward the NFL, the Alliance of American Football seems to be more subtle in their philosophical differences with the NFL and is more of a supplement to the league. The XFL has a mindset that “because the NFL is doing this, we’re doing that,” the Alliance of American Football made changes because they felt it made the sport of football better and not necessarily because of what it is the NFL did.

Of course, both leagues still need to produce quality football games and they need to have teams in cities that make sense in terms of TV markets and home attendance. The XFL may or may not use the same pool of cities it had teams for the first time around but the AAF is starting from scratch and is unbeholden to any other demands or concerns. So while the eight team locations haven’t been named (or possibly decided) yet, we can make some solid guesses about which cities make sense for the upstart league.

The ultimate no-brainer. You don’t start a professional sports league in America without at least one team in the New York City area. You don’t have to put them in the city, and your stadium options for doing so are limited anyway, but so long as you keep them close enough to use the name and/or the imagery, you’re good. Ideally, you can work out a deal to put a team in MetLife Stadium in East Rutherford, NJ. If you’re concerned about empty seats, you can always try to figure out if Red Bull Arena in Harrison, NJ can handle a pro football game.

Of course, if you really want to stick it to Vince McMahon and the XFL, put the team in Rentschler Field in East Hartford, Connecticut. The 40K-capacity stadium is football-ready and located about an hour from WWE’s headquarters in Stamford.

What makes Pittsburgh something of an obvious choice is the collection of people involved with the AAF. Former Pittsburgh Steelers safety Troy Polamalu is going to oversee players for the league and Steelers great Hines Ward is an advisor for the league. Being able to trot out these familiar faces should do wonders to help secure some interest locally in what’s already recognized as a football-crazed city. It might be a little strange to play in Heinz Field with its mustard-color seats but it’s going to be strange seeing new pro football teams out there anyway.

Perhaps the smartest thing the AAF can do is profit off of the NFL’s losses. If the two leagues do indeed have an understanding that makes it easier to co-exist, it’s ultimately in the NFL’s best interest for the AAF to step in and fill the voids left in the wake of relocation. There’s no better market for that than San Diego, which is only just beginning to get over the loss of the Chargers to Los Angeles (well, Carson). Multiple parties are currently trying to figure out what to do with SDCCU Stadium (formerly Qualcomm Stadium) and plans call for a complete overhaul to the creation of an urban village surrounding it. The arrival of a rent-paying pro football team could go a long way towards helping to generate interest in those revitalization plans. Plus, it gives locals a good incentive to show up and root for their new team as a way to stick it to the Chargers.

For the same reason it makes sense to come to San Diego, it also makes sense to put a team in Oakland. The Bay Area city is going to lose the Raiders right around the same time (not to mention the Golden State Warriors are jumping ship to San Francisco). What better time to welcome a new pro sports team with open arms? The Oakland A’s may or may not be excited about the possibility, given that they want to build a brand-new baseball stadium, but so long as the Oakland Coliseum is standing, there’s going to be room for an AAF team.

You can’t not have a team in Chicago, right? Sure the Bears run things here but there are a surprising number of possibilities when it comes to stadium options. Obviously, they can try Soldier Field, but if that’s off limits, the AAF could consider partnering with the upcoming Lincoln Yards development that may include a soccer stadium. There’s also Ryan Field in Evanston as an obvious solution if playing in the city doesn’t work. Putting down roots in the Second City seems like a no-brainer however they choose to do it.

The four pillars of American media markets would be New York City, Chicago, California, and Texas. So as long as you’ve got a team in each of those cities you can use them as anchors to build around. So the AAF could consider putting a team in any number of Texas towns, including Houston, Austin, and San Antonio. But we think it still makes the most sense to shoot for the moon and land in the Dallas-Forth Worth area. Yes, that puts you in Jerry’s backyard, but it’s a pretty big (and populated) backyard. You almost certainly can’t play in AT&T Stadium but you have your pick from Dallas’ Cotton Bowl to Fort Worth’s Amon G. Carter Stadium to University Park’s Gerald J. Ford Stadium.

Same as Texas, we could see a team landing in multiple locations in Florida. You’ve got a lot of college stadiums just sitting empty during the spring that would love to host an AAF team. But we’re thinking Orlando makes the most sense. Number one, you’re the only game in town. Number two, there’s a stadium ready to go (Camping World Stadium). Number three, you can sell it as part of a bigger destination trip. Come to see the AAF’s Orlando Ebersols (we’re guessing) and stay for the weekend to visit Disneyworld or Hollywood Studios. It’s also entirely probable that the XFL is eyeing Orlando, one of their original host cities, so it would be another poke in their eye.

With all of the other cities, you’ve built a foundation full of solid media markets and football hotbeds. For the eighth and final spot, we’re thinking it might be good to take a chance. You could consider Boston, St. Louis, Washington, D.C., Charlotte or Houston, but we’re gonna make the call for Nashville. It’s one of America’s fastest-growing metropolises and has the kind of momentum behind it that cities like Charlotte and Jacksonville took into getting their NFL franchises in the 1990s. The AAF would be the only pro football team in town (Writer Note: Oops, forgot about the Titans) and they could happily make use of Vanderbilt Stadium (assuming that Nissan Stadium, home of the NFL’s Titans, is off-limits).

Assuming these were the eight cities selected for the AAF, you could split the league into an East Division (NYC, Pittsburgh, Nashville, Orlando) and West Division (Dallas, Chicago, Oakland, San Diego). How does that sound?

2 thoughts on “Which eight cities should the Alliance of American Football put teams in?”