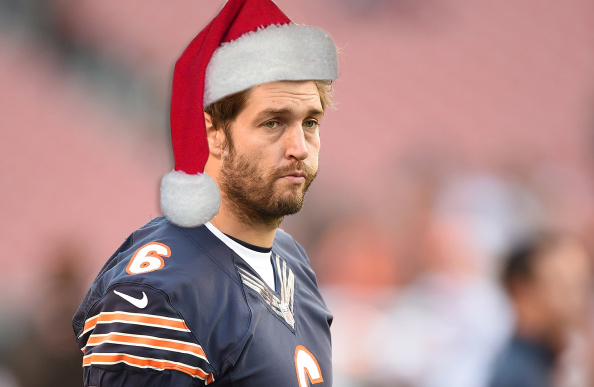 This week’s theme: The 12 Days of Christmas!

The “My true love gave to me a real contender” Division

Do they give out half-wins in the NFL? Carolina should get one for taking Odell Beckham, Jr. completely out of the realm of sanity. Either way, two games against stumbling division opponents separates the Panthers from forcing Mercury Morris to possibly having to finally shut up about something that happened 43 years ago.

The “Eight maids a-milking — and all of them productive” Division

This is really a team to behold: Start the season with seemingly no answer at running back; Pluck Chris Johnson off the scrap heap and resurrect his career; He gets injured and they turn to Andre Ellington, who provides a stop-gap until he goes down with injury; Then in comes David Johnson, who totals 229 total yards and 3 TDs. We see you, Bruce Arians.

The “Five Golden Rings — actually, we have six” Division

Is there a team that everyone is rooting against more than the Steelers to get in the playoffs? Good lord. Have fun trying to stop that offense. Antonio Brown is straight filthy, and he stitched a clown suit on Chris Harris Sunday evening — a guy who is among the best in the league at the CB position. Martavis Bryant? Markus Wheaton? The Steelers didn’t even use D’Angelo Williams and beat the best defense in the league. Yeah, we wouldn’t want to play them either.

We’ve detailed in this space week after week, how the Bengals, Broncos and Packers are good, but ultimately too flawed to win. Welcome the Patriots, who after another game, suffered about 29 new injuries to more key players. Almost makes you wonder if they had done something to deserve all this bad luck…

The “Seven swans a-swimming — isn’t it more of a glide, though?” Division

Three solid teams, all of whom stand pretty to very good chances at making the playoffs. But just because they’re in contention, doesn’t mean that they’re contenders.

The “Two turtle doves — you two truly deserve each other” Division, Part 1

We have replaced the (finally!) eliminated Cowboys from the muck that is the NFC East with the Falcons — another team that isn’t dead enough to officially declare dead. But trust us, they’re dead.

The “Two turtle doves — you two truly deserve each other” Division, Part 2

Just like when Kevin McCallister gives the homeless bird lady the turtle dove ornament because they’re now “best friends” (despite Kevin never offering her to come in from the cold and spend Christmas in his family’s comped two-story suite), the NFC East gives its second turtle dove to the AFC South.

The “Ten lords a-leaping — hey, can any of you play quarterback?” Division

Seriously, can any of you?

The “Nine ladies dancing — in a Los Angeles nightclub” Division

It seems almost a sure thing at this point that one of these franchises is going to be playing in Los Angeles next season. Just what The City That Has Never Cared That It Lost Football needs — three teams who can’t get out of their own way!

The “Twelve drummers drumming — but none of them in rhythm” Division

It seems harsh to drop the Bucs in with these retreads, but Tampa Bay easily could be contending for the last playoff spot and instead is sputtering. They, like the Lions and Bears, are at least entertaining to watch. The Saints defense somehow looks worse after Rob Ryan’s firing. And please, won’t someone put John Harbaugh out of his misery before he has to start Jimmy Clausen again?

The “Three French hens — stuffed, prepared and ready to be finally cooked” Division

Since there’s nothing football-related to talk about regarding these two teams, here’s two fun games to play: 1) Go look up Dolphins coach with the best winning percentage since 2000. (Answer: Dave Wannstedt.) 2) Do a Google image search of Jim Tomsula — the first two pictures are him looking confused, in the second he appears to be watching a scene from “Saw III”, in the third he appears to have smelled an infant’s diaper, and in the fifth he actually appears to be coaching football. Moving on.

The “Eleven pipers piping — are they pied?” Division

It takes a special sort of team to sink below the Browns in our power rankings. Heck, the Browns won last week and still came in last. But the Rex Ryan-coached Bills are a special team. The people of Buffalo are a hardscrabble lot — they survive brutal winters, crazy snowfall, downtrodden economy — and still manage to maintain a positive outlook. And even they are done with Rex. It appears his team is as well, with the defense (his specialty) quitting against the Redskins. THE REDSKINS!!! Let’s just look forward to his candidacy as Rutgers football coach in 2019.