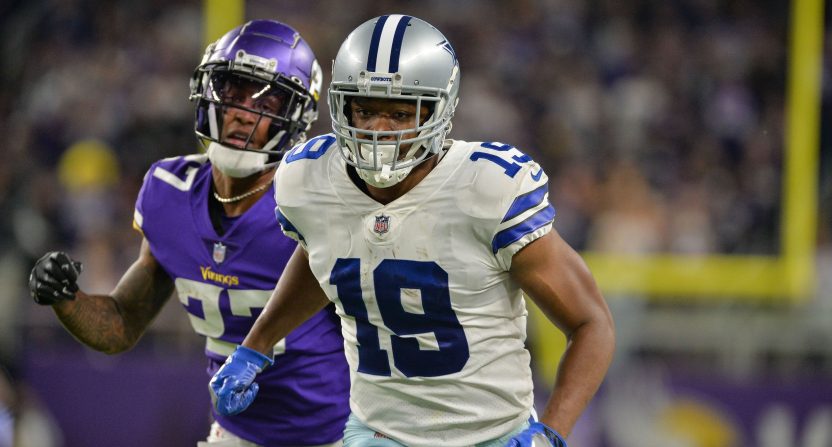 According to multiple reports, Dallas Cowboys receiver Amari Cooper will travel with the team on Wednesday before their game against the New Orleans Saints on Thursday.

Cooper has missed two games while on the reserve/COVID-19 list but was activated on Wednesday by Dallas. That’s a different outcome than what was expected after head coach Mike McCarthy said on Tuesday that Cooper is “still not feeling the best” and has a cough. McCarthy will miss the game because he remains in COVID protocols.

It’s unknown how much Cooper will play, especially since he hasn’t practiced in two weeks since entering protocols. His status as an unvaccinated player on the team has been a topic of discussion in recent weeks, especially as he tested positive.

The Cowboys were hit hard recently by illness as COVID as starting right tackle Terence Steele and cornerback Nahshon Wright were placed on the COVID list earlier this week. The team will also be without McCarthy, offensive line coach Joe Philbin, assistant offensive line coach Jeff Blasko, and two strength and conditioning coaches, all of whom are in protocols.

Cooper’s return is expected to spark the Dallas offense as he’ll be playing alongside CeeDee Lamb, who is also returning following a concussion a couple of weeks back. It would also be only the third time this season that Cooper, Lamb, and Michael Gallup would be on the field together for the Cowboys.

Meanwhile, the news that Cooper would be back in the Dallas Cowboys lineup on Thursday garnered some interesting reactions from the NFL world on social media.

If Amari Cooper is indeed able to go tomorrow night, it will be the first time all season that Dak has all three of his receivers, Tyron Smith, and Zack Martin.

This is as complete as the Cowboys have been all season. If they lay another egg, you might have some issues that extend beyond player/personnel. https://t.co/xSKLbUhs5Q

Looking like Dak Prescott will have all of his weapons Thursday night https://t.co/vARFZdRKLM

The Cowboys have a solid lead in the NFC East but they’ll need wins in games like this one if they want a shot at a high seed in the playoffs. Meanwhile, at 5-6, the Saints are playing for their playoff lives already. We’ll see how it all shakes out on Thursday night.