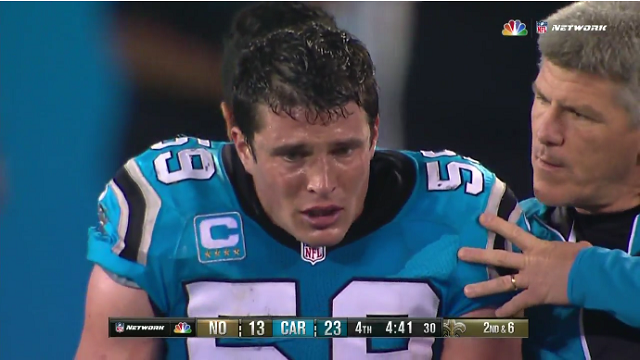 Although the Panthers pulled even with the Saints in the NFC South standings with Thursday’s 23-20 win, star linebacker Luke Kuechly suffered a scary injury late in the fourth quarter.

Below is the play live, where Kuechly teams up with cornerback Robert McClain to take down Saints running back Tim Hightower. As you can see, it’s unclear at first what the injury was:

The Panthers later announced on Twitter that Kuechly was being evaluated for a concussion.

On the replay, you can see was hit in the back of his head and also took a shot to the chest on the play:

Kuechly, a three-time Pro Bowler and the heart of Carolina’s defense, was in tears as the staff carted him off the field:

Kuechly missed three games last season with a concussion. When he returned in October, he told the MMQB’s Peter King that he understands the concussions risks inherent to football but still wants to keep playing as long as possible:

“It’s a game I love to play so much. I’m going to play it as long as I can. Everybody at this level makes a choice, and you know what you sign up for. I have my mind right. I know what I’m doing. I know the risks. I love the game. I’m going to keep playing it.”