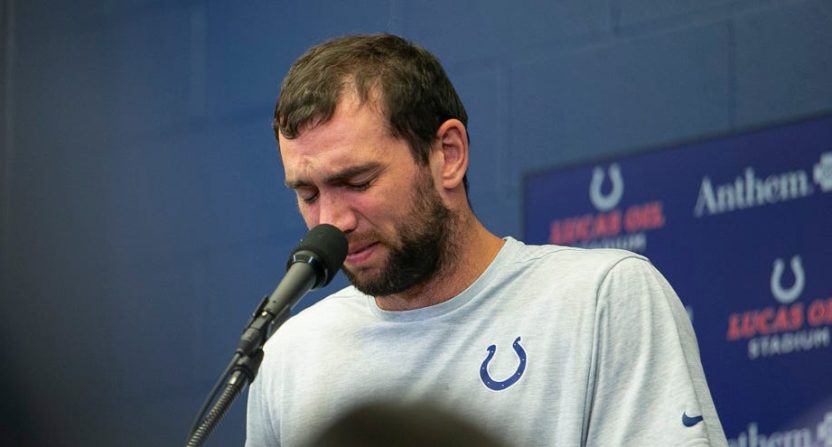 The sudden retirement of Andrew Luck from the Indianapolis Colts in 2019 made a lot of NFL folks wonder what happened and whether or not the Stanford star would ever consider a return to the league. People have reached out many times to see if he might return to the field, but that never seems to be the case.

While he’s never seemed to regret ending his playing career, Luck has finally shared some details about why he decided to call it quits and what kind of regrets he does have about the end of his NFL time.

Luck spoke with ESPN’s Seth Wickersham about what was happening in his life and he shared some harrowing details about his state of mind and the state of his body.

He wasn’t sleeping well, he was in pain, he was fighting with Nicole, the team was halfway across the globe without him, and if he stopped to examine his life, the entire world he had constructed might start to unravel, perhaps revealing it to be fatally flawed all along. “I understood myself best as a quarterback,” Luck says. “I felt no understanding of other parts of myself at all.”

Nicole was prepared to leave him if nothing changed. Then one night, he broke. He cried, he cursed, he vented, he confessed, and most of all, he leveled with Nicole in a way she thought he was incapable of. “There were some things that when I looked in the mirror, I did not like about myself,” he says. “I was self-absorbed, withdrawn, in pain, and feeling pressure.” —

He played one more season after that but the pain finally caught up with him and he called it quits to focus on his family and himself.

As far as any regrets he had about the end of his career, Luck wishes that he’d handled the decision a little differently.

“I regret the timing of when I retired.”

He felt he had let people down, for which he had to learn how to forgive himself. What mattered to him most about football, what he wanted the kids to learn, was the “uber accountability.” He knew that his own ideas of accountability and of football were more complicated than the romantic version that he had shared. And yet on the drive home that afternoon, Luck couldn’t stop smiling at the thought of those romantic notions. Of sitting in meetings and geeking out for 45 minutes on one play. Of tough moments, when he was hurting or reckless with the ball. Of dumb stuff, like being whacked by pool noodles in practice to reduce fumbles.