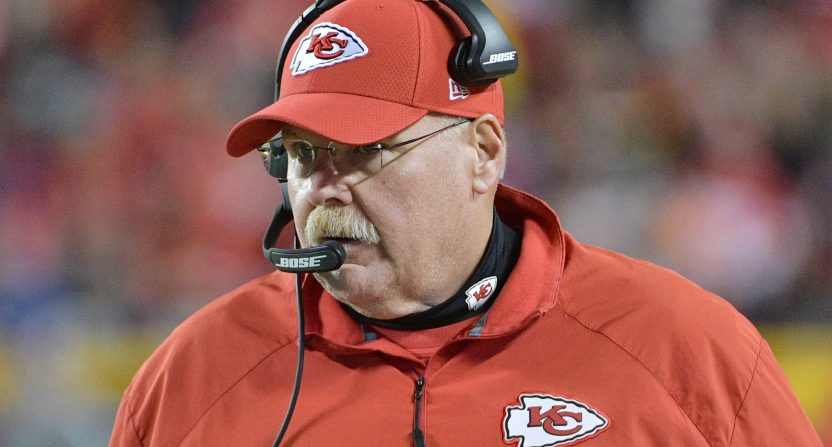 We owe Andy Reid an apology. For decades, we’ve joyfully poked fun at him. We’ve laughed at his atrocious clock management skills. We’ve snickered at his 11-13 playoff record. We’ve lampooned at physique and his unflattering manner of dress.

Heck, look at him as a child.

Look at him as an adult.

I am also here for the Andy Reid Kool-Aid man GIF pic.twitter.com/pNlaBB3LKg

Admit it – it’s pretty freaking hilarious. What’s better than making fun of an NFL coach while lying on the couch with your face covered in Cheetos dust? That’s what this country is all about. But upon further reflection, I’ve had an epiphany. We’ve got it all wrong.

Andy Reid is an American hero. He’s a visionary who was way ahead of his time. We were just too consumed with mocking him to notice. Seriously. Reid, in his 20th season, is still getting it done. His Kansas City Chiefs (7-1) are the best team in the AFC and the best hope for dethroning the evil empire New England Patriots.

He has been a head coach in the NFL every season since 1999. Those only ones close are Bill Belichick (in his 19th straight season) and Marvin Lewis (17th). Belichick might be the greatest coach in NFL history. Lewis, well, he’s an anomaly/ outlier who is only still around because Cincinnati Bengals owner Mike Brown is inexplicably loyal to him.

Check out Reid’s bonafides. (Yes, even with his disappointing postseason record). Among active coaches, only Belichick has won more games. And Reid isn’t merely a compiler.  Of the all the coaches in NFL history who have appeared in at least 250 games, only seven have better winning percentages than Reid (.611).

Look at Reid’s contemporaries. Belichick has Brady. Mike McCarthy has Aaron Rodgers. Sean Payton has Drew Brees. Those are three of the ten best quarterbacks of all time. None of Reid’s QBs are sure-fire Hall of Famers. With the Philadelphia Eagles, it was Donovan McNabb, Jeff Garcia, Michael Vick, and Kevin Kolb. With the Kansas City Chiefs, it had been Alex Smith before Reid turned the keys over to Patrick Mahomes.

It’s not a coincidence that all of those quarterbacks, with the exception of Garcia, enjoyed career high passer ratings under Reid. And guess what? Garcia, then 36 years old in 2006, posted his second highest passer rating. Call him the quarterback whisperer.

Reid is so good, so confident in his abilities that he jettisoned the 2017 passer rating leader. Who does that?!? Any other coach not named Belichick would be roasted for trading away a guy who was more efficient than Drew Brees and Tom Brady. Not Reid. He simply plugged in Mahomes and the Chiefs have their most exciting team in franchise history.

Reid is the Mike D’Antoni of the NFL. What D’Antoni does for NBA point guards, Reid does for quarterbacks. You get better – a lot better. It doesn’t matter who you are. He’ll scheme a way for you to pass for 300 yards and three touchdowns. Even Nathan Peterman would look competent.

And also like D’Antoni, Reid has been criticized for his style of play. For most of his tenure with Philadelphia, the Eagles were routinely among the top 10 in percentage of passing plays. They passed early and they passed often, mostly with McNabb at the helm. Reid got to the franchise to the Super Bowl after the 2004 regular season, losing to the Patriots.

Reid was castigated for his seemingly over-reliance on the passing game, the same way D’Antoni was mocked for his run-and-fun basketball with the Phoenix Suns. Both of those coaches were simply ahead of their time. It took a while for the rest of the league to catch up. With the rules changes favoring offense, his skills as a play-caller have become more valuable.

In the NBA, everybody runs now and shoots 3-pointers. In the NFL, everybody passes like crazy. In 2003, only three teams threw the ball more than 60 percent of the time. In 2018, it’s 16 teams. It’s worth noting that since Reid has been in Kansas City, the Chiefs have yet to crack the top 10 in percentage of passing plays. This year, they’re at 58.7 percent – ranking 17th.

What Reid has done in recent years is tweak his system to get the maximum. Kansas City is tied for first with the equally explosive L.A. Rams in yards per play (6.9). Last season, they were second (6.1) with Smith at quarterback.

Now Reid has Mahomes who might be the next evolution of the position. He has size (6-3), mobility (4.8 in the 40-yard dash), and is accurate (65.6 completion percentage). That combination along with high-quality skill position players has allowed Mahomes to get off to one of the best starts in NFL history. He leads the NFL in TD passes (26) and passing yards (2,526) and is fourth in passer rating (115.3). Mahomes is piloting the top scoring team in the league (36.3 points per game).

Mahomes wasn’t the No.1 overall pick. He wasn’t a slam dunk choice. He was the 10th overall selected player in the 2017 draft, and the Chiefs traded up to get him. There was some skepticism about Mahomes’ future in the league, since he played in Texas Tech’s wide-open system that tends to inflate stats. Reid smartly developed this quarterback by adapting his system to fit Mahomes.

Reid knows how to find and nurture skill position players.  While Mahomes was taken in the first-round, some of the Chiefs’ biggest stars were not first round picks, including Kareem Hunt (third round, 2017 draft), Travis Kelce (third round, 2013 draft), and Tyreek Hill (fifth round, 2016).

This Kansas City squad looks talented enough to reach the Super Bowl. But of course, many won’t believe in the Chiefs because of the franchise’s lack of playoff success. And under Reid, Kansas City is 1-4 in the postseason.

There are legit concerns. The defense has allowed 25.6 points per game, which ranks among the worst in the AFC. Reid still struggles with clock management. But whatever happens in the postseason, Reid has made a staggering imprint on the game. His coaching tree includes six active NFL coaches. Two have won Super Bowls: Doug Pederson with the Eagles and John Harbaugh with the Ravens. Another, Ron Rivera, guided the Panthers to the Super Bowl.

Celebrate Belichick’s championships all you want. When it comes to having a coach to root for, Reid is the NFL’s most likeable coach.