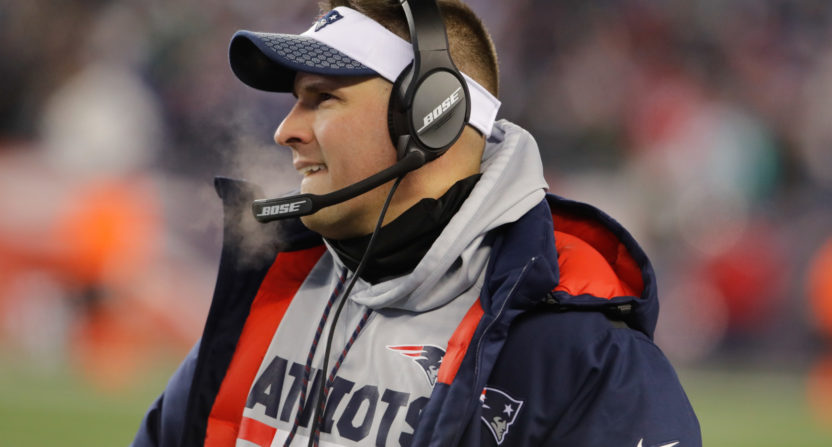 By the time an NFL team tweets out a message welcoming its new coach, the hiring is usually pretty damn official

But on Tuesday morning, the Indianapolis Colts welcomed Josh McDaniels as their new coach, and by Tuesday evening, Adam Schefter had reported that McDaniels would in fact remain in his current role as Patriots offensive coordinator.

Per Schefter, McDaniels had one foot out the door when New England owner Bob Kraft stepped in and “ultimately wound up sweetening [McDaniels’] contract.” That, plus McDaniels’ comfort in New England, reportedly led him to renege on his agreement with the Colts. Via ESPN:

The truth is, McDaniels has been vacillating on this decision throughout the interview process, ever since meeting with the Colts on wild-card weekend. It is the reason a second meeting with Colts officials and team owner Jim Irsay was held. McDaniels was trying to get comfortable with the idea of taking his family out of New England and moving it to Indianapolis.

Throughout the process, McDaniels had emphasized to the Colts that he would need time to mull the decision and discuss it with his family. The more McDaniels reflected on potentially having the opportunity to coach the Colts, the more it did not feel right to him and the better it felt to remain in New England. McDaniels still would like to become a head coach again, but this time, in this instance, he was not comfortable.

The Krafts also stepped in this week to make McDaniels feel even more wanted, and the two sides were able to come to an agreement Tuesday night that will enable New England to retain its offensive coordinator at a time it is losing its defensive coordinator, Matt Patricia, to Detroit.

Schefter also reports that Kraft might have tried extra hard to convince McDaniels to stay as a sort of revenge on the Colts, who launched the infamous Deflategate scandal in 2015.

The revelation that McDaniels would spurn the Colts immediately sparked speculation that Patriots coach Bill Belichick was stepping away and leaving the team to McDaniels, but several reporters, including Schefter, quickly clarified that Belichick is going nowhere. It’s possible McDaniels got some sort of coach-in-waiting promise, but there’s no indication the New England job will open up anytime soon.

According to Pro Football Talk, which mentioned as early as Sunday that McDaniels was having doubts about taking the Colts job, Indianapolis has three candidates ready to interview immediately.

And as for these tweets…

We are excited to welcome Josh McDaniels, who has agreed to terms as our new head coach!

… they did not age well.

UPDATE: The Colts have deleted the tweets and released a statement saying they were “surprised and disappointed” to announce McDaniels would not be joining the organization.