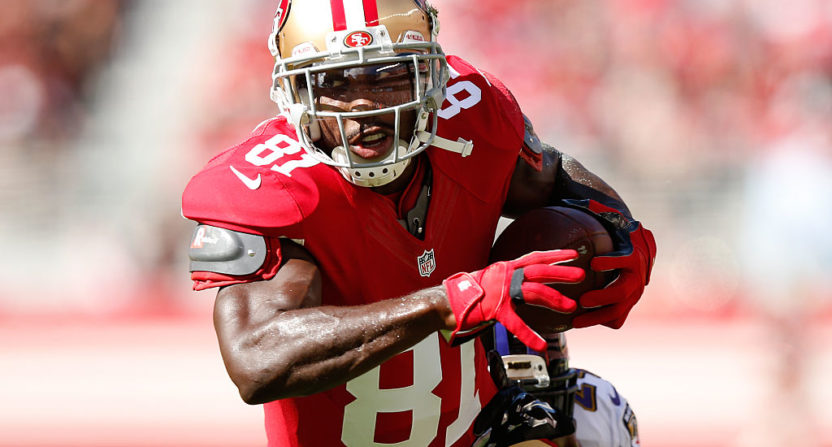 After 14 seasons in the NFL, veteran wide receiver Anquan Boldin decided to retire from football this summer after two weeks with the Buffalo Bills. Boldin had seen and done just about everything he could in the NFL, including winning a Super Bowl, so there was nothing left for him to prove at the professional level. Instead, Boldin wanted to spend his days focusing on promoting criminal justice reform. But now, it appears, Boldin has the itch to get back on the field for one last go.

According to a report from Adam Schefter of ESPN, Boldin is contemplating getting back on the field. Boldin’s contract rights are still owned by the Bills, but the team has reportedly given the wide receiver permission to pursue a trade. Boldin’s intent is to be able to play closer to his home in Florida. The NFL trade deadline is Tuesday, so time is short to find a trade partner and a deal the Bills will approve.

In a recent Bleacher Report profile, Boldin admitted he still had a desire to continue playing football, and he never doubted his ability to do so even as he stepped away from the game.

“Do I still love the game? Yes,” Boldin said. “Do I still have a passion to play? Of course I do. But I feel like for me there is something more important than football at this point in my life.”

Boldin has been among the leading voices in the recent wave of players speaking out for awareness of social injustices in the United States. He has lobbied legislators on criminal justice reform and was one of four players who sent a letter to NFL commissioner Roger Goodell outlining how the NFL can address injustice in the legal system. Boldin’s cousin was shot and killed by a police officer two years ago, making Boldin’s emotional connection to the movement ignited by former San Francisco 49ers quarterback Colin Kaepernick (Boldin played with Kaepernick in San Francisco) a personal one.

Boldin played with Kaepernick in San Francisco. Although Boldin never joined the outcasted quarterback in his national anthem protests, Boldin made it clear he supported his quarterback’s and other players who chose to demonstrate, which he explained in detail earlier this year on The MMQB;

The reason I didn’t [participate in an anthem demonstration] was seeing the way people took that and ran with it and never talked about the issues. I didn’t want to give people an excuse to not deal with the issues that we are dealing with. Because when people brought it up, the only thing they wanted to say was, Well, you are disrespecting the anthem, you are disrespecting the flag. But they never wanted to talk about why guys were taking a knee, why guys were raising a fist. And for me, that’s the message that I wanted to get out. This is why guys are protesting, this is why guys are taking a knee, or whatever guys are doing, this is why. I never wanted that message to get lost.

While Kaepernick has been branded the face of the NFL’s protest movement, Boldin’s activism has been less showy but more effective. And because Boldin never took a knee and joined Kaepernick, he may have more of a chance to play a game this season than Kaepernick. Kaepernick remains in free agent limbo midway through the NFL season and the door to his own return to the league seems to be closed, despite the eroding caliber of quarterback play throughout the league. Kaepernick suing NFL owners, alleging collusion to keep him out of the league, likely will not change that outcome for him this season, and Kaepernick’s noticeable absence from recent meetings in New York between players and owners felt like a missed opportunity to raise awareness about social injustices.

Boldin may be fighting the same fight as Kaepernick, but the manner in which he has done so will likely be seen is more considerate and responsible by NFL team owners who still struggle to come to grips with the whole idea in the first place. Boldin’s 14 years in the league also give him more of a reputation to rely on when it comes to his character that NFL teams can trust, should Boldin be added to an NFL roster in the next week.

Whether or not we see Boldin in an NFL uniform remains to be seen, and it may ultimately be unlikely given the timing of his attempted comeback. But even given the circumstances and timing of it all, there is still a better chance we see Boldin on an NFL field this season than we will Kaepernick, even though they are fighting the same fight.