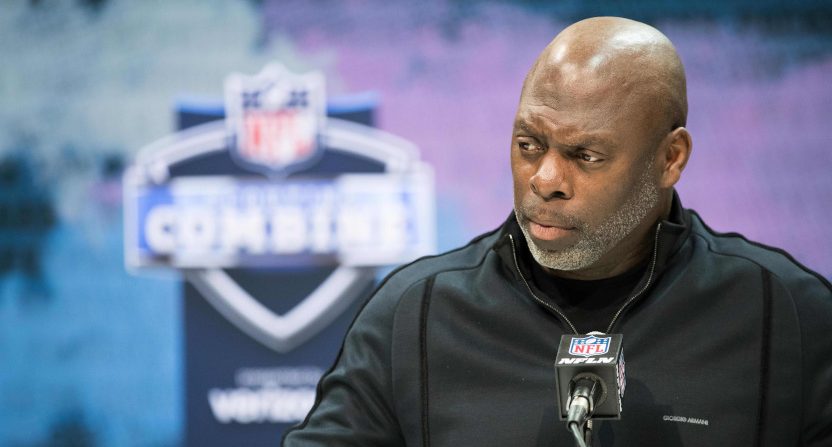 On Friday, NFL Network’s Jim Trotter reported on two new proposals NFL owners are set to vote on next week to expand the current Rooney Rule on minority head coach and general manager hires. One proposal, removing an anti-tampering banner and allowing outside clubs to interview under-contract coordinators and assistants, drew some minor attention, but the other one, giving teams improved draft slots (in the second through fourth rounds) if they hire or retain a minority head coach or general manager, drew much more. And it’s interesting to see the negative response it’s received from even current minority coaches like Anthony Lynn of the Los Angeles Chargers. Lynn (seen above at the 2020 NFL combine in February) spoke to Zach Gelb on CBS Sports Radio Friday, and said he thinks the intentions behind this idea are laudable (it’s perhaps notable, as Trotter tweeted, that the NFL has currently matched a 17-year-low in minority head coaches and general managers), but the execution isn’t necessarily going to work out well. Here’s a transcription of some of Lynn’s comments via Mike Florio of Pro Football Talk:

“I think sometimes you can do the wrong thing while trying to do the right thing.”

…“I think that there are a lot of qualified African-American coaches that could be a head coach in this league, and I just pray that we do our due diligence and give these guys an opportunity,” Lynn said. “There are some qualified applicants and they need an opportunity, and I think this is — out of desperation this is something that has been thrown out there.”

Lynn also suggested that the league should expand from the presumption that offensive and defensive coordinators are the natural candidates to receive a promotion to head-coaching positions, arguing that non-coordinator assistants (including assistant head coaches) should get greater consideration.

“There are a lot of brilliant guys that can call plays but can’t lead a damn team,” Lynn said.

On some levels, it feels like this is an overreaching approach thrown out by the NFL in an attempt to stifle the criticisms it’s seen for a lack of diverse HC and GM hires. If they float this idea and it gets shot down by NFL owners, while there’s a lot of popular support for shooting it down, they can say “Well, we tried” and avoid making actual improvements that might lead to more diverse hires. But even if that isn’t the intent, this still isn’t a great plan; providing teams tangible draft position rewards for picking minority candidates gives in to the suggestion that those candidates are inferior, when it appears like what’s needed more is a thorough consideration of those candidates in the first place. (And on that front, the other proposal here, of removing anti-tampering penalties and allowing teams to interview under-contract assistants from other teams, seems far more practicable and promising.) We’ll see where this proposal goes when the owners vote on it, but it’s certainly notable to see Lynn speak out against it.