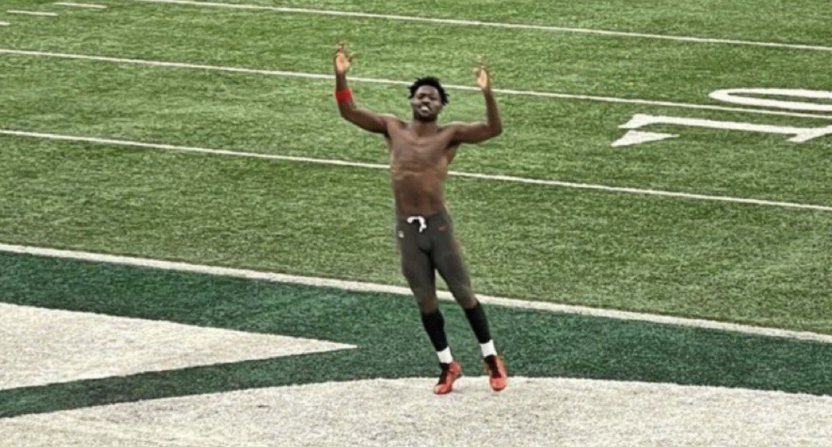 Sunday, Antonio Brown shocked the MetLife Stadium crowd and TV audience by removing his jersey and shoulder pads, throwing his undershirt and gloves into the seats, and then waving before leaving the game while it was being played.

Brown had just returned to action last week following a three-week suspension over reports that he attempted to acquire fake vaccination cards. The Tampa Bay Buccaneers and head coach Bruce Arians spent a lot of time defending Brown and giving him opportunities to play for them in spite of mounting evidence that he needed some help, either due to mental health issues or otherwise.

As we just said on #GoBucs radio Antonio Brown was benched by Coach Bruce Arians before taking off his shoulder pads and jersey and throwing them down on the bench. He's gone to lockerrom on his own

Sunday’s antics seem to signal an end to the relationship between the two though the team declined to comment for the time being, at least until the game is over.

Bucs have no official word on why Antonio Brown pulled off his jersey and shirt and ran into the locker room during the game. Won't be addressed by the team until postgame.

Meanwhile, plenty of NFL folks are discussing the role the Bucs played in enabling Brown and not being realistic about what they needed to do in his best interest in order to benefit them on the field. While Brown is catching a lot of flak for walking off the field, the team and coach Bruce Arians are certainly getting a lot of heat as well for allowing the situation to get to this point.

You know what's worst of all about the AB situation? Bucs are going to claim concern for him and it's all bullshit. They knew what his situation was when they signed him. Everybody in league has known. Brady was with him (briefly) with Patriots. They don't care. Nobody cares. https://t.co/F6HsFa0vpK

Your key phrase there is, "If he's willing to take it."

He never has and his employers enable him because he can play. https://t.co/UrtkkeptYT

Flashback to *checks notes* 2 WEEKS AGO, when Bruce Arians excused and enabled Antonio Brown’s history and pattern of behavior bc Bucs needed a healthy WR.

The more appalling behavior is everyone who enabled Antonio Brown for the past four years with more NFL opportunities instead of pushing him to get real help or face real consequences.

Also, when we talk about Antonio Brown needing help, let’s not forget about the people Brown hurt. Including women he allegedly sexually assaulted.

Someone in the post-game has to ask Tom Brady about his continued advocacy for Antonio Brown.

We’ll hear from Bruce Arians, Tom Brady, and the Tampa Bay Buccaneers organization after the game for sure,  but there are going to be larger questions for everyone involved beyond whether or not Antonio Brown ever plays another game for the Bucs, or any NFL team.