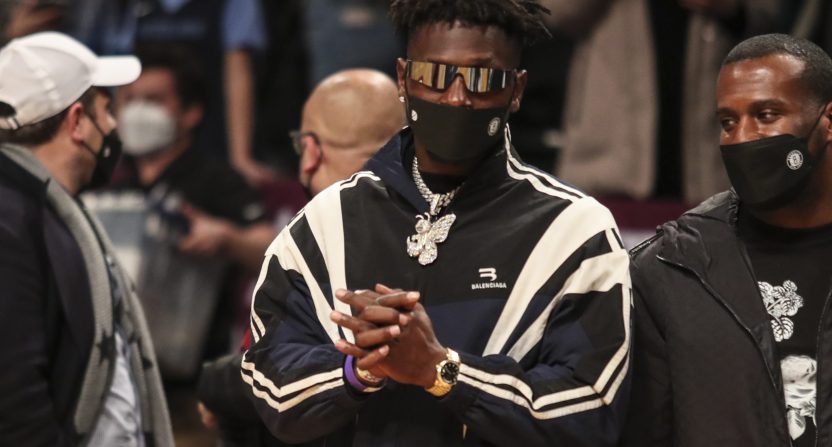 Antonio Brown’s NFL career has taken so many turns it’s hard to keep track of all of them. After a fallout with his latest team, the Tampa Bay Buccaneers, Brown is making the interview rounds to explain his side of the story.

Brown infamously left the field in the middle of a game last month and was released by the Bucs the following week. Head coach Bruce Arians had some blunt comments for Brown but the wide receiver would later accuse the head coach and his staff of not taking his injuries seriously and forcing him to play through them. In the weeks since Brown has been popping up in random places and taking shots at Tampa Bay when possible.

Brown appeared on HBO’s “Real Sports with Bryant Gumbel” on Tuesday and said that he plans to pursue legal action against the Buccaneers for trying to make him play when he says he was too injured. He also inferred a potential civil defamation lawsuit against the Bucs for claiming that he had a spontaneous mental health episode.

“All of our options are on the table,” said Brown’s attorney Sean Burstyn. “We’re going to hold to account the Tampa Bay Buccaneers, Bruce Arians, the general manager to the extent anyone who’s responsible for this spin that Antonio isn’t reliable to do a good job playing football because he doesn’t have the mental fortitude to do it. They’ll be held to account.”

Wednesday, Brown sat down for an interview on “CBS Mornings” with Nate Burleson. The biggest takeaway Brown wanted to share was that he claims he does not have mental health issues.

Embattled NFL star Antonio Brown is speaking out in his first network news interview to @nateburleson, opening up about his mental health and why he walked away in the middle of a game, tomorrow on #CBSMornings. pic.twitter.com/QKhy3VEGHI

“I tried it through the NFL, but I don’t really got time to consult with random people I don’t know about my mental space or how I look at things,” Brown said. “Most of the people from different forms of the world. Like, I’m from the pit. Most of the people we talk to, they from the palace. So how your lenses look at life is not how mines is.”

The full interview is scheduled to be released on Thursday. It probably won’t be the last interview that Brown does in the coming days.