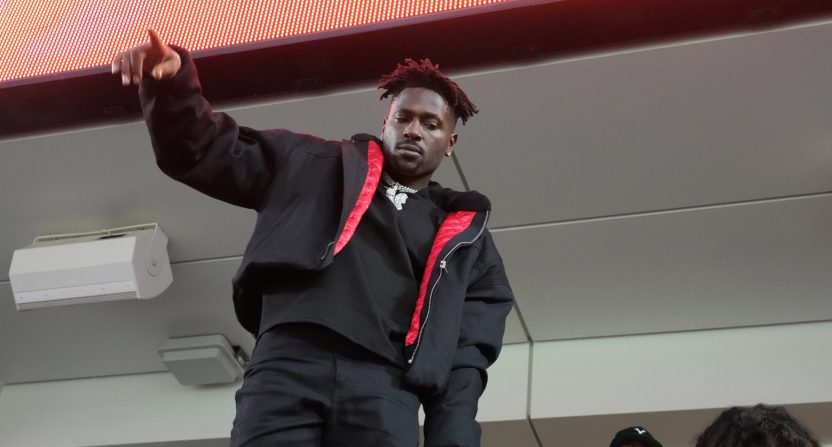 To the surprise of very few people, Antonio Brown does not expect to play in the NFL in 2022. He said it himself during an interview that took place at a Fan Controlled Football game.

“Obviously, we live the game, but you can’t play forever,” Brown said. “I think I’m a great player that’s done everything in the game.”

Asked if he would play in the NFL in 2022, Brown said, “Nah, don’t play yourself looking at me to play.”

Brown made headlines last week when he said that he wanted to retire from the NFL as a member of the Pittsburgh Steelers, but it’s probably a safe assumption that the Steelers didn’t exactly rush out to associate themselves with him again, given the way his time ended with them as well as how his time ended with the Tampa Bay Buccaneers.

Despite putting up big stats over his career and continuing to be a solid receiver, Brown is persona non grata in NFL circles and it’s hard to imagine any NFL team wanted to risk a contract on him, especially given the way things blew up in Tampa and he’s conducted himself since.

Brown also has yet to undergo surgery on his injured ankle that was at the center of his blowup with Tampa Bay coach Bruce Arians. He has said previously that he wanted a commitment from an NFL team before he made surgery plans.

No surprise but plenty of people around the NFL world had thoughts on Brown’s announcement, most of which were around the fact that there was “no surprise.”

I think Randy Travis sang a song about this… “If my phone still ain’t ringing I’ll assume it’s still ain’t you” https://t.co/H1YsoyFSjL

I would also like to announce that I am not playing NFL football in 2022 https://t.co/XtvoTSgMQL

When nobody wants you:

Not that he had a choice of playing in 2022. No one was knocking on his door even to work him out, much less sign him, and he may or may not need ankle surgery. https://t.co/OM7nIomZlI

If the trade deadline passes & a postseason contender has a starting WR out due to injury, that team would be remiss not to check on @AB84 situation, at said time. Outside of the NFL interfering, seems like a challenge that’d also be hard for AB not to relish down the road too 🤷‍♀️ https://t.co/DT0bpRcGa1

All of that said, we’re guessing we haven’t heard from Brown and his opinions for the last time.