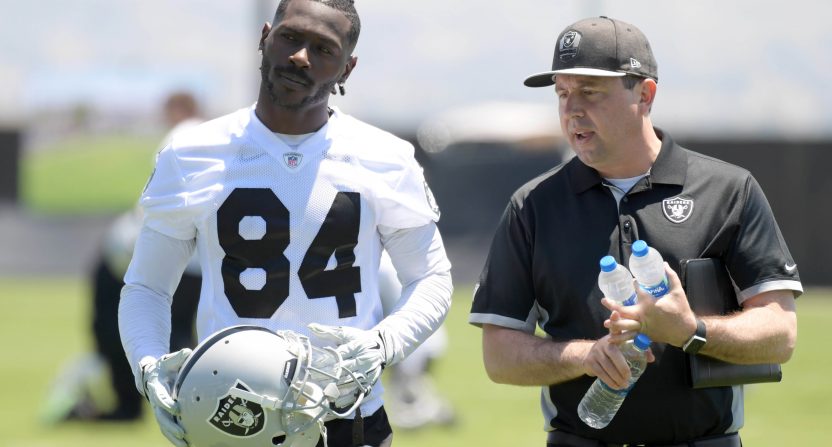 Antonio Brown’s lack of participation in Raiders training camp has been until now attributed to the injuries he suffered to his feet after a cryotherapy mishap.

That’s weird enough, obviously, but it gets weirder: apparently Brown hasn’t been playing as a form of protest against the league mandating he wear a new helmet. Brown reportedly spent two hours on a conference call with league officials today in an effort to be granted approval to wear his old helmet, according to ESPN’s Adam Schefter.

Wide receiver Antonio Brown has told the Oakland Raiders that unless he can wear his old helmet, he will not play football again, league sources told ESPN on Friday.

League sources said Brown had a two-hour conference call with league officials on Friday in an attempt to argue why he should be allowed to wear his 10-year-old helmet.

A decision could come as early as next week, sources said.

Brown wants be allowed to wear the helmet he prefers, not one of the helmets that league rules mandate, league sources said. Brown believes the new certified helmet protrudes out and interferes with his vision as he tries to catch the football.

The Raiders have been sending Brown other approved helmets to wear, but at this time, he is not interested in wearing any of them.

League sources also told ESPN that Brown’s recent absence from Raiders training camp has more to do with his helmet than with his feet. He suffered extreme frostbite on his feet as a result of not wearing appropriate footwear when he entered a cryotherapy chamber last month in France, a source told ESPN.

According to Mike Silver at NFL.com, Brown’s helmet stance dates back much farther than the foot issue:

Brown’s vocal resistance to the mandate, both during OTAs and shortly after his arrival in Napa, California, for training camp, has contributed to a disconnect with the team that acquired the seven-time Pro Bowl selection via a trade with the Pittsburgh Steelers last March.

According to four sources familiar with Brown’s current absence from camp, which dates back to late last week, Raiders coaches and players are concerned that the receiver’s unhappiness regarding the helmet issue might be playing a role in his decision to stay away from Napa.

The lengths Brown is going to be allowed to wear a 10-year-old helmet in defiance of league rules has, unsurprisingly, stunned even his teammates.

However, sometime in the next couple of weeks, Brown once again tried to take the field with his old helmet, which he had since repainted with colors approximating — but not completely mimicking — the Raiders’ silver-and-black design. He was told the helmet was not allowed, and once again, he acquiesced and wore the new model.

Before Brown arrived at training camp last month, coaches and teammates believed the issue had been resolved. But Brown, who practiced on his tender feet for only two days before leaving Napa to seek another opinion, tried yet again to sneak his old helmet onto the practice field, ultimately being told by team officials to remove it.

“He’s still freaking out about it,” said one Raiders player. “He hasn’t been here for awhile, and no one knows where he’s at.”

Brown is clearly an unbelievably talented football player, but this is just so, so weird. Maybe Hard Knocks will get to the bottom of this.