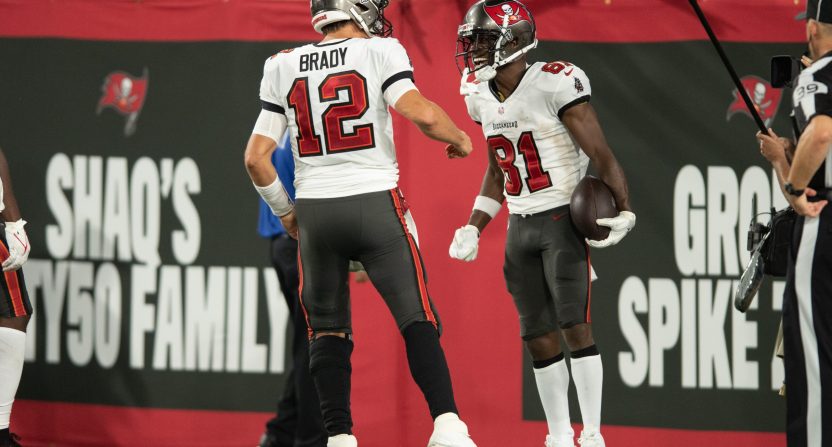 Tampa Bay Buccaneers quarterback Tom Brady was reportedly excused from practice by head coach Todd Bowles for a personal matter. The star quarterback is expected to return at some point after the team’s next preseason game against the Tennessee Titans on Saturday.

Brady’s absence from the team has stirred up a ton of controversy towards the seven-time Super Bowl-winning quarterback, and a former teammate made his opinion on the matter very clear.

Former Buccaneers wide receiver Antonio Brown took to social media on Wednesday morning to discuss how he viewed Brady’s absence, basically saying that Brady is receiving special treatment that other players wouldn’t get.

“Tom Brady manipulate the game gets 14 days go home get his mind right lol. Now you see the difference, put that sh*t on.”

Now u see the difference

Put that Shit on

Brown has been very candid in the past about his relationship with the Buccaneers organization after the ugly divorce between the two sides, calling out the organization by saying he was “cut” and didn’t quit on the team.

This time Brady was caught in Brown’s crossfire, which many around the NFL world see as a stab in the back to Brady after he constantly stuck up for Brown and even allowed him to live in his house while he was on the Buccaneers.

You talking about the same guy that let you live in his house? The same guy that vouched for you when no other team wanted you? Look at you now. You won’t sniff an NFL locker room again. Sad.

Tom Brady: offers to let AB live in his home and rehabilitate his career after a series of disturbing incidents

Show me the time Tom took his jersey off mid game and ran into the locker room while pandering to the crowd- you’re creating a false equivalence – you made this bed dude.I empathize with mental health issues but you can’t fault Tom for how his team treats him with mutual respect

There’s a difference AB. He’s the greatest football player of all time. He can show up whenever he wants and still bring your team to the promise land. You on the other hand can’t be trusted to finish out a season. You needed Tom. He never needed you.

Hopefully, Brown’s one rap career will be successful, because it seems very plausible that he may have taken his last snap on an NFL field.