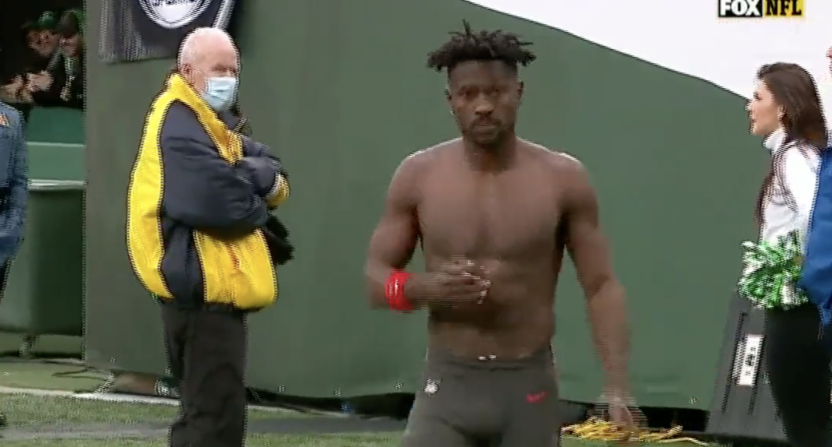 Antonio Brown is never too far from making headlines for the wrong reasons and it appears he’s done so again. The mercurial Tampa Bay Buccaneers wide receiver recently returned from serving a three-game suspension for violating the joint NFL-NFLPA COVID-19 protocols but he appears to have up and quit midway through Sunday’s game, taking off his uniform and shoulder pads and throwing his undershirt and gloves into the crowd before leaving the field.

Antonio Brown ran off the field shirtless after showing some frustration on the sidelines.@JenHale504 pic.twitter.com/Jet6ofnNm2

Brown appeared frustrated on the sidelines before the incident, which ended up him literally waving to the crowd from the endzone during a play before heading into the tunnel.

Brown’s time in Tampa may finally be done thanks to this latest incident, though it’s a credit to his abilities that he’s even lasted this long. While he has been dealing with injuries for much of the season, he remained productive when on the field. However, a December report that he had been working to get fake vaccination cards turned things on its ear, leading to a suspension from the league. Head coach Bruce Arians defended Brown, though he had said previously that he would cut the receiver loose at the sign of any problems. Brown remained with the team, however, as they continued their push to be the top seed in the NFC playoffs and defend their Super Bowl championship.

However, it’s going to be pretty hard to let this latest incident slide. And in the meantime, it’s causing quite a stir on social media in NFL circles.

It is genuinely amazing that Ben Roethlisberger and Antonio Brown put up all those numbers together and neither of them murdered the other at any point. Steelers got away with one with that ending in a regular ol' trade demand saga rather than a crime scene

Tampa should have been penalized for this clown show. Antonio Brown did this in the middle of a play on the other side of the field. pic.twitter.com/qxjjwVH4Dk

Antonio Brown just retired in the middle of the third quarter ☠️😂

Any coach or exec who signs Antonio Brown next should be fired on the spot.

Antonio Brown, who was supposedly gone if he “screwed up” once, has now gone full Constanza. Minus the body suit.

There’s certainly way more to come regarding this situation and we’re sure Brown will have plenty to say. We can’t wait to hear from Tom Brady and Bruce Arians about it too.