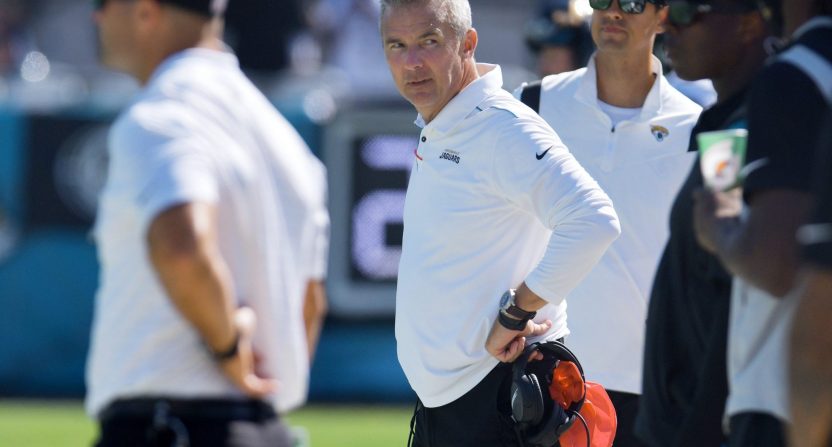 If Urban Meyer is destined to fail as the head coach of the Jacksonville Jaguars, he appears to be going about it in a textbook fashion.

The ornery college football coach who won national championships at two schools, Meyer had fashioned himself into something of a demigod. But when the facade cracked, he did what so many men in that position do, he left and figured he could remake his image once more in a different place. But while Meyer was always successful on the field, his reputation off the field had ballooned into something that made him thoroughly unlikable to just about anyone who wasn’t a fan of the team he happened to be coaching in that moment.

It’s a classic American success tale. Someone succeeds, we blindly laud their success, we start to see the human being behind the success, we don’t like what we see happening in service of that success, we turn on this successful person and start rooting for them to fail.

If that’s the arc that Meyer currently finds himself on, then he is clearly well established in that last part because, holy cow, it is really hard to find someone whose last name isn’t Meyer or Tebow who is hoping that Urban can figure it out right now. If anything, it certainly seems like everyone else doesn’t just want to see him fail but they want to see him thoroughly humbled.

What else do you take from the reaction surrounding the leaked video that went viral on Saturday, showing Meyer getting grinded on by a young woman in a bar while his wife is MIA? Twitter had a field day the likes of which we probably haven’t seen since the day Donald Trump announced he’d gotten COVID. The jokes flew freely and everyone seemed to have the same general idea. Whether purposeful or not, this is the perfect piece of the puzzle to help push Meyer towards leaving Jacksonville and returning to safe confines of a TV studio or college football sideline.

The holier than thou routine that Meyer has propped his reputation on feels like a house of cards that everyone has been dying to pick apart and this latest saga in his miserable Jaguars tenure is the prime opportunity to do so. It’s entirely possible that Urban will stick it out, figure out how to turn the team around, and make everyone feel foolish for ever doubting him. But the odds really do not appear in his favor right now and everyone, truly everyone, seems to be enjoying the hell out of his unenjoyment.