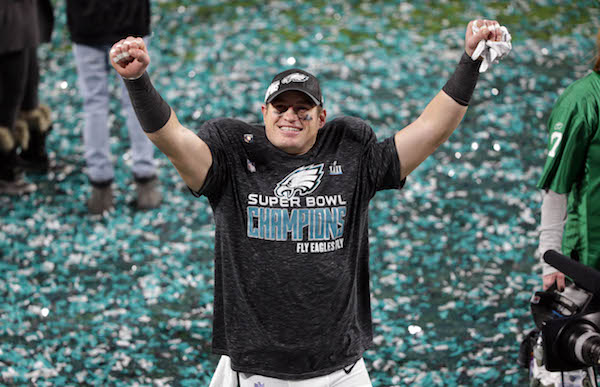 Last Sunday in Minnesota, the Philadelphia Eagles proved their doubters wrong for the final time this season. Thanks to quarterback Nick Foles playing out of his mind, the Eagles captured the franchise’s first-ever Super Bowl with a 41-33 win over the New England Patriots.

For the next couple of weeks, Philadelphia and its players will continue to celebrate their championship victory. But sooner more than later, it will be back to business for the Eagles as they set out to become the first team to capture back-to-back Super Bowl wins since the 2004 Patriots. (An NFC team hasn’t accomplished the feat since the Dallas Cowboys did it in 1993.)

So how possible is it that Philadelphia could be standing alone atop the NFL mountain again next season?

Well, a good portion of the players who appeared in last Sunday’s win are expected to return to the team in 2018. Of the 22 Eagles that started in Super Bowl LII, 19 are under contract for next season (10 on offense, nine on defense).

Oh, yeah — and some dude named Carson Wentz is expected to be healthy enough to be back starting under center for Philadelphia by Week 1 next season. Even if Wentz is not ready to go for Week 1, the Eagles can keep Foles around knowing that he can step in and perform well in place of the young quarterback.

Along with Wentz, Philadelphia will be getting a number of players back from injury in 2018, including left tackle Jason Peters and cornerback Sidney Jones.

Since they finished the 2017 regular season as the top team in the NFC, the Eagles will have to play a first-place schedule in 2018. Philadelphia faced six teams with winning records last season and on next year’s schedule they will have to face off against a total of eight.

The Eagles have to take on a number of teams in 2018 that performed really well and made the playoffs this past season including the Atlanta Falcons, Carolina Panthers, Jacksonville Jaguars, Los Angeles Rams, Minnesota Vikings, and New Orleans Saints. How Philadelphia plays in these six matchups will be a big factor in determining their chances of getting back to the Super Bowl next year.

In addition to the actual matchups on their 2018 schedule being tougher, every opponent is going to step up their game a notch when playing the Eagles next season since they’re facing the reigning Super Bowl champs.

It’s not going to be easy, but if Philadelphia can stay relatively healthy and continue their solid play from 2017, then they have as good a chance of any recent Super Bowl champion to win a title again next season.