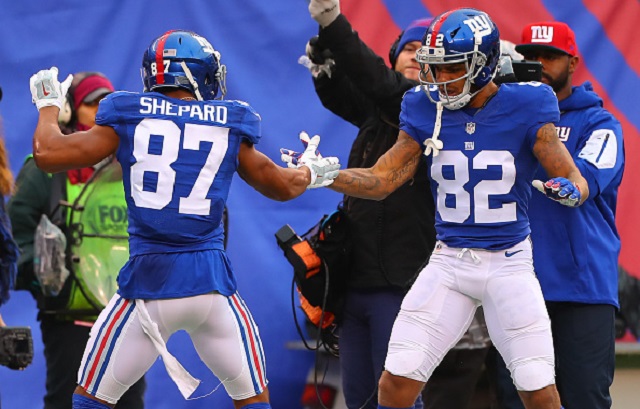 The Dallas Cowboys may be the 2016 NFC East champions, but they aren’t the only team in the division to worry about as the playoffs rapidly approach. The 10-4 New York Giants are as red-hot as any team in the NFL at present and given their recent history, this is something every playoff-bound or playoff-worthy team should find unsettling.

Twice in the past 10 years, the Giants have reached the playoffs and continued onto the Super Bowl, which they also won (each time against the New England Patriots). Both times, the team seemed to fly under the radar, excelling in one area or another but not all, yet still pulled together enough upon reaching the postseason to win out. And the 2016 iteration of the G-Men seems eerily familiar.

Now, the Giants haven’t clinched anything yet. They have two in-division opponents remaining — Philadelphia on Thursday and Washington in Week 17 — games that, should New York lose, would keep them from playing football well into January. But the past two weeks, in particular, have proven that the Giants are more than up to the challenge, having notched two home wins over the division-leading Cowboys and then the Detroit Lions. And defense has what has kept their heads above water, more than anything else.

Arguably the play of the day for the #Giants Defense. @EliApple13 with a deflection timed perfectly to prevent a Golden Tate TD. pic.twitter.com/KV5w8Gi9oa

Dallas and Detroit managed only 13 combined points to the Giants’ 27 in those two games. New York’s defense currently ranks third in points allowed and while it’s only 23rd in passing yards allowed, it ranks second in passing scores. Against the run, the Giants are even better, ranking sixth in yards and eighth in touchdowns allowed. But unlike 2007 and 2011, it’s not only the front seven that is making plays.

The Giants’ 14 interceptions ranks them eighth in the league; safety Landon Collins is tied for second with five and cornerbacks Dominique Rodgers-Cromartie and Janoris Jenkins each have three. The trio is also defending passes at an impressive rate, with Jenkins and Rodgers-Cromartie both tallying 17 apiece and Collins, 13. But defensive coordinator Steve Spagnuolo (also the team’s DC in 2007) certainly knows the power of the pass-rush. This hallmark of the modern Giants defense was lacking a season ago and because of that, the team had the league’s worst defense in 2015.

But New York general manager Jerry Reese recognized these defensive shortcomings and made heavy investments on that side of the ball. A trio of free agents—the aforementioned Jenkins, defensive end Olivier Vernon and defensive tackle Damon Harrison — were each given five-year contracts with a combined total value of $193.75 million. In turn, the three have been integral to the Giants’ defensive resurgence. Harrison is Pro Football Focus’ ninth-ranked interior defender. Jenkins ranks fifth among cornerbacks. Vernon ranks 10th among edge defenders, one spot behind teammate Jason Pierre-Paul, whose career has been revived by the presence of such talented new coworkers, with his seven sacks the second-most on the team behind Vernon’s 8.5.

HIGHLIGHT: Odell with an awesome one-handed catch for a TD! #GiantsPride https://t.co/bVCMSnHd0N

The offense should not be overlooked, either. Though only 27th in yards and 24th in points, the Giants are 11th in passing attempts and, most notably, 10th in passing touchdowns. That credit is due not only to quarterback Eli Manning, whose season is quite average by most measures (a completion percentage of 63.4, 25 touchdowns thrown to 13 interceptions, 20 sacks taken), but also to receiver Odell Beckham Jr., who has accounted for 85 of Manning’s 322 completions, 1,173 of his yards and 10 of his touchdowns. Rookie Sterling Shepard has also stepped up as a solid foil for Beckham, with 55 catches for 592 yards and, more crucially, seven touchdowns.

This passing production is especially important because the Giants’ run game is ranking 30th in yards and 31st in scores. Leading rusher Rashad Jennings has only 497 yards on 154 attempts (or 3.2 yards per carry) and just two touchdowns. And it also further highlights just how important the Manning-Beckham-Shepard connection and the stellar defense has been to this squad. Few teams could run the ball so poorly and find themselves at 10-4 in late December.

Every team in the current NFL playoff picture has its areas of expertise and areas of weakness, the Giants included. And those weaknesses can be masked by strengths if the strengths are strong enough. The Giants, with their takeaway-heavy and pass-rushing defense and the opposite-of-secret weapons in Beckham and Shepard are well-built to make their way into the postseason and, when there, make a deep run against their would-be NFC opponents. Dallas may be the camera-ready darlings of the conference and the division, but do not sleep on the sleeping Giants. We know all too well what they are capable of this time of year.