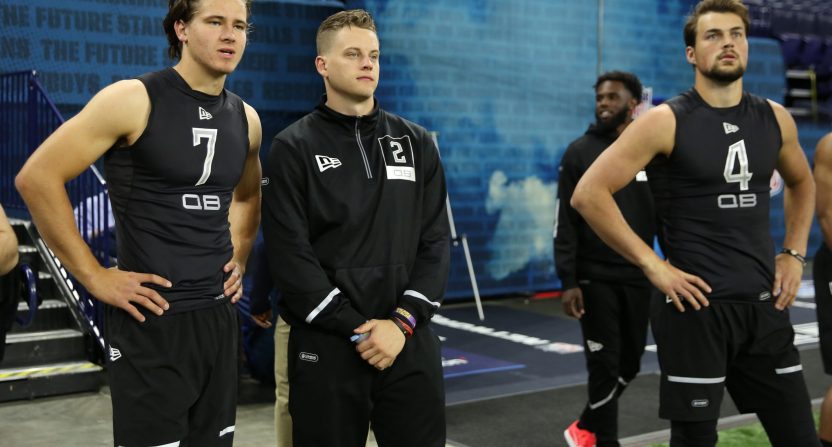 The Underwear Olympics are over. All the measurements and drills from the NFL Scouting Combine have been recorded. In the world of analytics, we now have more information and more ways to examine data than ever before.

You would figure all this knowledge would yield better results. Especially when it comes to the most important position in all of sports.

You’d be wrong. It seems like most NFL teams still struggle to properly evaluate quarterbacks.

As many as five could be selected in the first round of the draft next month: LSU’s Joe Burrow, Alabama’s Tua Tagovailoa, Oregon’s Justin Herbert, Utah State’s Jordan Love, and Washington’s Jacob Eason. We (the media, fans, analysts) have no idea which ones, if any, will succeed. And it appears like NFL teams don’t know either. Teams spend a lot of money and invest a lot of time and resources and still get it wrong.

Just look at the past two NFL MVPs: Patrick Mahomes and Lamar Jackson. They’re dominating the sport in ways we’ve never seen before. In hindsight, both should have been the No. 1 overall pick of their respective drafts. They weren’t. And that’s the biggest indictment of the entire process.go Bears traded up to No. 2 to pick North Carolina’s Mitch Trubisky. That decision looks worse and worse with every Mahomes highlight. To be fair, no one on draft day predicted that Mahomes would become a regular-season MVP and Super Bowl MVP within his first two seasons as a full-time starter.

But it’s the job of NFL general managers to have vision and courage. Kansas City, which already had Alex Smith coming off a Pro Bowl season, could have played it safe. Kept the status quo. But the Chiefs boldly traded up to take Mahomes. That decision is the greatest draft day trade in the franchise’s history.

Of the nine players taken before Mahomes, three appear to be on their way to great careers: defensive end Myles Garrett (No. 1 overall to the Cleveland Browns), safety Jamal Adams (No. 6 to the New York Jets), and Christian McCaffrey (No. 8 to the Carolina Panthers). But none of those guys have been as impactful as Mahomes.

Then there’s Jackson. Six-time Executive of the Year Bill Polian infamously said that Jackson would be better suited switching to wide receiver. Whoops. It’s astounding how badly virtually everyone missed on Jackson. We’re not talking about a small school prospect. Jackson was a Heisman Trophy winner. Still, four quarterbacks were drafted before Jackson in 2018. And Jackson lasted until the final pick of the first round, No. 32 overall.

As much as we credit the Baltimore Ravens, it should be noted that they had two first-round picks and used the first (No.25 overall) on tight end Hayden Hurst. But they clearly saw something that no one else did. Even though the Ravens had former Super Bowl MVP Joe Flacco at quarterback, they traded up for Jackson. When the time was right, they replaced Flacco with Jackson. And last year, Jackson directed the most potent attack in the league on his way to MVP honors.

The quarterbacks draft ahead of Jackson: Baker Mayfield (No. 1 overall to the Cleveland Browns), Sam Darnold (No. 3 to the New York Jets), Josh Allen (No. 7 to the Buffalo Bills), and Josh Rosen (No. 10 to the Arizona Cardinals).

How could so many NFL teams be so wrong about this generational talent?

There are some signs that franchises are finally thinking differently. A decade ago, a team would never dream of drafting a quarterback in the first-round under 6 feet. Last year, 5’10” Kyler Murray was the No. 1 overall pick by the Arizona Cardinals. It’s still early, but Murray is trending in the right direction. He was the league’s Offensive Rookie of the Year.

What does this mean for the current crop of draftees? Burrow had probably the greatest season a college quarterback has ever had. He’s the presumptive top overall pick to the Cincinnati Bengals. For a lot of reasons, this makes a lot of sense. The QB-needy Bengals are moving on from the Andy Dalton experience. Burrow, a former Ohio Mr. Football, would sell a lot of tickets and signal a new era for the franchise under second-year coach Zac Taylor.

Taylor is a former quarterbacks coach with the Los Angeles Rams (2018) and Miami Dolphins (2013-15). He’s qualified to know if Burrow is the right guy. However, if Burrow is a bust, that could cost Taylor his job. Worse yet, what if another quarterback (Tagovailoa? Herbert? Love? Eason?) turns out to be a star? Taylor and the Bengals will never hear the end of it.

If only there was a formula that could predict future success. NFL draft gurus routinely mention accuracy. But if it were that simple, teams wouldn’t make so many mistakes.

Five Thirty Eight tried to crack the code and came up with a stat: completion percentage over expected (CPOE) based on college statistics. It looked at 49 quarterbacks drafted since 2012. The No.1-rated quarterback was Russell Wilson, a 5’11” third-round choice who’s on his way to a Hall of Fame career. But the No. 2 quarterback was notorious first-round bust Johnny Manziel and No. 3 was Jameis Winston, the 2015 top overall pick who’s been mediocre at best. No. 4 was undrafted Kellen Moore (Yikes!). And No. 5 was first-rounder Deshaun Watson (Hooray!).

Five Thirty Eight did rate Kyler Murray as the quarterback with the highest probability of success from the 2019 draft.

Ultimately the success (or lack thereof) of Murray, the No. 1 quarterback of this year’s draft, and the top passer taken in 2021 will tell us if teams are getting better or worse at evaluating quarterbacks.