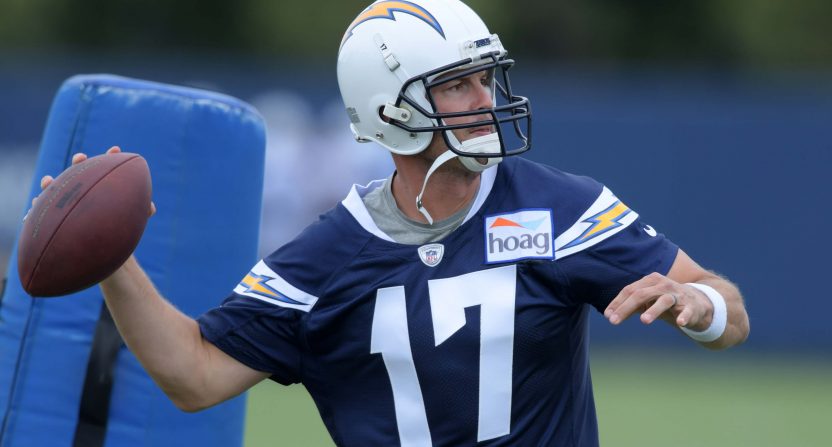 Because the Los Angeles Chargers are the most snake-bitten team in the NFL, few are willing to buy into the idea that they’ll suddenly rise from their stadium for ants to make a sudden Super Bowl run in 2018.  The Chargers don’t really have a home or an established fan base, so few have even noticed that they haven’t been to the playoffs since 2013.

But the man who runs the division rival Denver Broncos wants you to think that the Chargers are the team to beat in the AFC West.

While their future landlord made the lion’s share of the headlines coming out of Los Angeles this offseason, the Bolts quietly followed up a 9-7 season with a strong offseason. They shored up the offensive line with the addition of veteran center Mike Pouncey before landing one of the steals of the draft when ready-to-start-ASAP safety Derwin James dropped to them in the No. 17 spot.

But the Chargers were actually a lot better than their 9-7 record in 2017. Botched last-second field-goal attempts cost them back-to-back potential wins to start the season, they fell two points short against the eventual Super Bowl champion Philadelphia Eagles to drop to 0-4 two weeks later, and yet they somehow fought back to nearly make the playoffs. They won nine of their last 12 games, but they had no business losing to the Jacksonville Jaguars in Week 10 (it was one of those typical Murphy’s Law Chargers losses) and probably should have defeated the New England Patriots two weeks before that.

They were a 12-win team in a nine-win team’s body, but the law of averages indicates they should eventually have better luck. After all, they’ve been ravaged by injuries in each of the last three seasons. In 2017, their top two draft picks — wide receiver Mike Williams and guard Forrest Lamp — were injured right off the bat and unable to make major impacts as rookies.

That means they could essentially have two rookie classes in 2018. Imagine how much better this time could be with James, Williams and Lamp. And don’t forget that cornerback Jason Verrett also missed practically the entire 2017 season.

If they can remain healthy, it’s hard to find a weak spot on this roster. The pass protection unit is no longer a punchline, ageless quarterback Philip Rivers is coming off another Pro Bowl campaign, they’ve got a hell of a backfield duo in Melvin Gordon and Austin Ekeler, they’ve got one of the strongest and deepest receiving groups in the league, 22-year-old Joey Bosa should only get better as part of a lethal pass rush, and a secondary that was already good with Casey Hayward, Desmond King and Trevor Williams will be a hell of a lot better with James and Verrett.

The Broncos are still facing major offensive questions coming off an abysmal season. They need a lot to break their way with new quarterback Case Keenum and a defense that isn’t the same post-Aqib Talib.

The Kansas City Chiefs are going through major transformations on both sides of the ball as they move on from both Alex Smith and Marcus Peters. Quarterback Patrick Mahomes II could need some time, while the secondary is thinner than ever.

And the Oakland Raiders have experienced a rocky offseason under new/old head coach Jon Gruden, who appears to be under the impression time stopped when he first left coaching a decade ago. They’ve become older and will likely rely just as heavily on quarterback Derek Carr as they did when the feces hit the fan in 2017.

The Broncos, Chiefs and Raiders are vulnerable. So while the Chargers just might be jinxed based on the fact they’ve already lost tight end Hunter Henry to a torn ACL, they still might actually be the under-the-radar favorites to win their first AFC West title this decade.