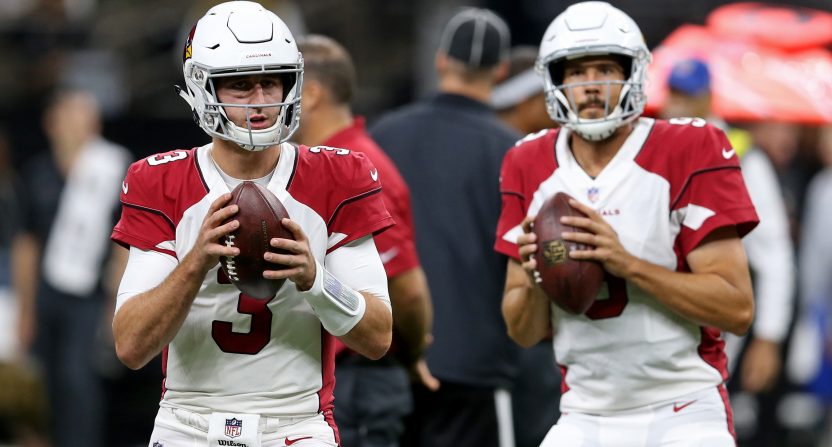 When taking a look at the offensive production by the Arizona Cardinals so far this season, it’s hard to ignore one glaring statistic.

In two games this year, the Cardinals have accumulated an embarrassing total of just 228 passing yards. Arizona quarterback Sam Bradford has not even thrown a touchdown pass this year.

Of Bradford’s 37 completions (on 61 attempts) this season, only five have resulted in gains of 10 or more yards. With talent like running back David Johnson and wide receiver Larry Fitzgerald on the roster, it is actually a bit impressive that the Cardinals’ offense has performed so poorly this season.

So what is the reasoning behind Arizona’s historically bad start on offense in 2018?

Some may turn to the play-calling of Cardinals offensive coordinator Mike McCoy. In the same role with the Denver Broncos in 2017, McCoy was fired midway through the season due to the Broncos having an “inefficient offense.”

Dating back to last year with Denver, McCoy-led offenses have averaged just 1.25 touchdowns per week in their last eight games. In a full season, that would amount to a total of only 20 touchdowns. No team’s offense in the NFL has finished with fewer than 23 trips to the end zone in an entire year since 2012.

Some fingers can be pointed at McCoy for Arizona’s struggles on the offensive side of the ball this season. But the guy the Cardinals have been starting at quarterback is not doing the team any favors either.

Sam Bradford is certainly not who Arizona should be starting under center for the remainder of the year. Since entering the league in 2010, Bradford has never led a team to the playoffs and it’s pretty simple to figure out why. He is the king of check-down city and his pocket presence is pretty much non-existent. Thanks to his knees being more fragile than an antique china set from the Great Depression, Bradford struggles mightily to avoid an oncoming blitz these days.

Under pressure this season, the Cardinals’ veteran quarterback has completed just 10 of 22 pass attempts for 66 yards, thrown two interceptions, and been sacked three times, according to Pro Football Focus.

Despite his struggles, Arizona is continuing to roll with Bradford as their starter in Week 3. So, who is on the Cardinals’ schedule this week? Oh, just Khalil Mack and the Chicago Bears defense, which already leads the NFL with 10 sacks in 2018.

In an effort to generate any sort of offensive production this season, Arizona is apparently going to make the playbook more on the simple side moving forward. Cool, but that’s probably not going to work as long as Bradford remains under center.

Watching from the sidelines this season as the team’s offense has struggled is Cardinals rookie quarterback Josh Rosen. Arizona traded up in last April’s NFL Draft to select Rosen with the 10th overall pick. Yet here the Cardinals are, choosing experience over talent.

Arizona is not going to have a chance in many games this year with Bradford as their starting quarterback. So why not bite the bullet and insert Rosen into the starting lineup?

What do they really have to lose at this point? The offense is doing next to nothing on the field with Bradford leading the way and Rosen is at least athletic enough to make plays outside of the pocket. The league’s never-ending infatuation with Bradford is continuing on for now though and it might have already ended any hope that the Cardinals had at making the playoffs this season.