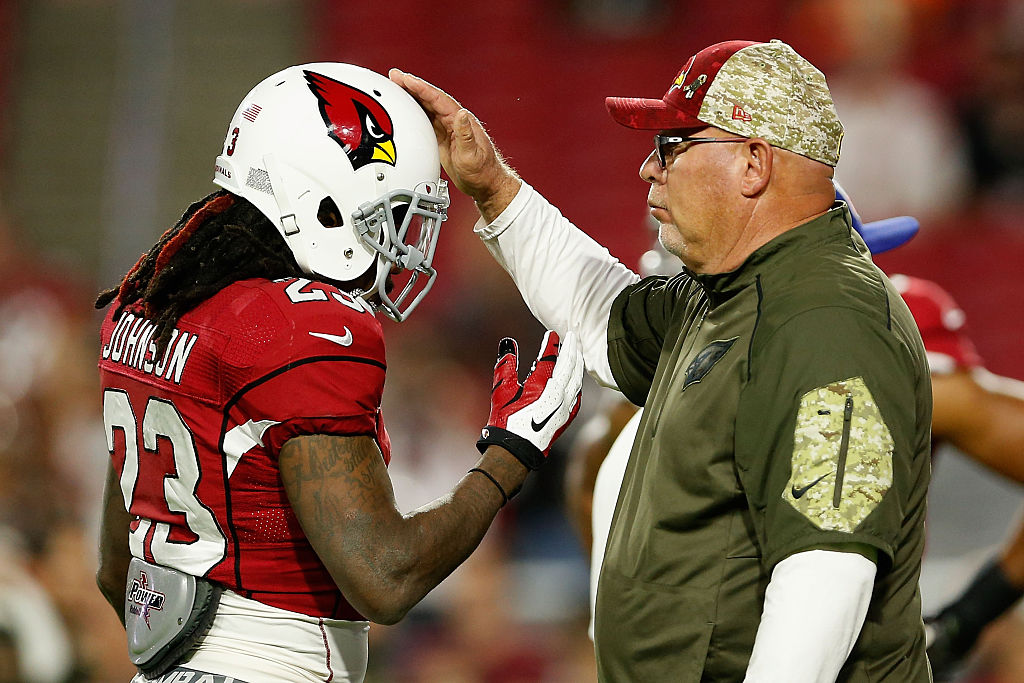 What does Chris Johnson’s fractured tibia mean for the Cardinals’ Super Bowl chances? (Fox Sports’ Jay Glazer had the scoop on that.)

Ehhh, not much. Let’s examine.

The guy is unquestionably an NFL Comeback Player of the Year candidate. Going into Week 13, Johnson is fourth in the league in both rushing attempts (196) and yards (814), and not only did he hit the unenviable, typically NFL quarantine-generating running back age of 30, but in March, he was clipped in a drive-by shooting during a time when he was unemployed.

Remember: Last season, Arizona was cruising along in the NFC before the whole season exploded when Carson Palmer simply tried to execute his patented slide up in the pocket, tearing his ACL against the Rams in early November.

Bruce Arians’ upstart team was 8-1 at that point in the season, yet finished 3-4 down the stretch and settled for a wild-card spot instead of a division title. Also remember, the team then had to start Ryan Lindley in a road playoff game. Woof.

Should Cardinals fans plunge into hair-pulling “here we go again” mode after the Johnson news?

Look around the NFL. Injuries are ev-er-y-where. This is the start of the period when no player is totally 100 percent. Sure, Johnson—out of nowhere really—reinvigorated Arizona’s perennially bland, ineffective ground game in 2015, giving the Cardinals the most well-rounded attack they’ve had in ages. But running backs are the easiest players to replace in this league, and GM Steve Keim has done a marvelous job acquiring adequate-to-sound depth across the entire roster.

Johnson-esque speedster Andre Ellington could be sidelined for a while, as the team is waiting on test results after Ellington suffered a turf toe injury. Though without either top choice in the backfield, the long, lean and electric rookie David Johnson is going to have an opportunity to step up. Together, Ellington and Johnson have toted the rock 71 times for 386 yards (5.43 yards per carry) and added 32 catches for 377 yards (11.7 yards per grab).

The Cardinals also have RB Kerwynn Williams on the practice squad, and he had 53 carries for 246 yards (4.6 yards per rush) as a replacement last year behind a worse offensive line.

If Ellington comes back healthy—a relatively big “if,” given the nature of the injury and his recent inability to stay on the field—the two will be able to shoulder the run-game load needed to supplement Arizona’s passing attack, which by my estimation, is the finest, most-difficult-to-defend aerial offense in football.

Ok then… who can’t Arizona afford to lose?

For the past month, Palmer has been my pick for NFL MVP. Yeah, Tom Brady’s had a remarkable season. He’s standing in the pocket behind a patchwork offensive line and has seen three of his top receiving targets go down. But the complexity of Arians’ offense has been enough to give Palmer the edge going into Week 13.

While Brady has a slightly better completion percentage and QB Rating, Palmer’s average depth of target is a league-high 11.5 yards (per Pro Football Focus). Brady’s aDOT of 8.2 yards is 20th out of 37 qualifying signal-callers. For perspective, Palmer has thrown 172 passes behind the line of scrimmage and up to nine yards past the line of scrimmage this season. Brady’s thrown 287 of those short passes. That’s like three games worth of passes, per PFF.

There is nothing Brady can do besides run his offense, and Cam Newton has been amazing for the undefeated Carolina Panthers, but Palmer has routinely been asked to make more challenging throws down the field and he’s excelled in doing so.

As for Calais Campbell… well, he’s still in the top five of the most underrated defenders in the NFL. Yeah, even at age 29. He’s the defensive line anchor and the main reason Arizona is fourth in the NFL against the run. They can’t lose him.

Then there’s Mr. Fitzgerald. The consummate alpha wideout. Palmer has a 118.3 rating when throwing in his direction this season and he’s scored seven touchdowns. His size, strong hands—two drops on 85 catchable targets, per PFF—and blocking ability make him easily one of the most valuable receivers in the game today.

On Mathieu… he’s making a strong case as the most versatile back-seven player in the league. The former LSU stud has 63 tackles, four interceptions, one touchdown, a forced fumble and a sack. He plays free safety, strong safety and all the linebacker spots. The guy is literally all over the field.

And finally, Mr. Peterson. The cornerback may have come into this season slllliiiightly overrated; however, he’s allowed just 19 catches all year and a pedestrian 53.9 QB Rating. He typically shadows the opponent’s No. 1 receiver. Being able to essentially eliminate that weapon each game is vital.

So, fret not, Cardinals fans. While Chris Johnson, by one definition, has “gone down,” this season has shown us that the Seahawks and their Legion of Boom are “down,” and the Packers and Aaron Rodgers’ astonishing offense are “down.” (I mean, who saw the Seahawks sitting at 16th in yards per attempt allowed or the Packers at 24th in yards per attempt on offense? Not me. No way.)

Just gear up to be as loud as possible during that Dec. 10 game against the Minnesota Vikings that will probably have major implications on which club gets a bye into the second round of the playoffs.

Fortunately for Arizona, that clash with the Vikings, and the Dec. 23 contest with the Packers, are at home. As long as Palmer, Campbell, Fitzgerald, Mathieu and/or Peterson don’t go down, the Cardinals will be legitimate Super Bowl contenders and the definition of “a team no one wants to play” in the postseason.