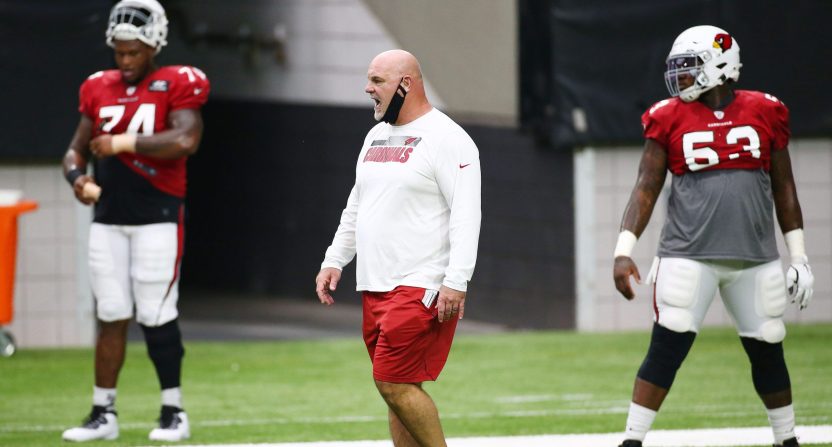 The Arizona Cardinals seem to be falling apart at the seams after their latest loss to the San Francisco 49ers on Monday night. Their on-field struggles, and a reported incident prior to Monday’s game, have resulted in one Cardinals coach losing his job on Tuesday.

According to Bob McManaman of The Arizona Republic, Cardinals head coach Kliff Kingsbury said that he has relieved offensive line coach Sean Kugler of his duties following an incident in Mexico City.

It’s unclear at this point exactly what Kugler did to be fired, but Kingsbury revealed that it was serious enough for him to be removed from the team prior to Monday’s game.

“We relieved him of his duties, and he was set home Monday morning prior to the game,” Kingsbury told McManaman. “It’s challenging anytime you make a staff change in that type of manner.”

Kingsbury told me, "We relieved him of his duties, and he was sent home Monday morning prior to the game," adding, "It's challenging anytime you make a staff change in that type of manner." https://t.co/EZmXhvdPuj

Kugler joined the Cardinals organization in 2019 and was seemingly a respected member of the coaching staff, so it is certainly shocking to hear about his removal from his position. The major in-season change has a lot of people around the NFL talking.

Cardinals News – From what I am hearing the dismissal of Offensive Line Coach/Run Game Coordinator Sean Kugler had nothing to do with coaching.

From a football standpoint, this is a massive loss.

Sean Kugler often made the most of subpar offensive line personnel for the Cardinals.

Just another day with this team…

I can only imagine the things you gotta do to immediately lose ya job on a work trip in Mexico. https://t.co/KcPwlQ05Ik

Well I was wrong. It wasn’t Vance Joseph who was the *first* scapegoat. It was the guy who elevated an adequate offensive line to an above average one when healthy for the last few seasons.

The Arizona Cardinals are an absolute joke. I feel bad for the fans. I really do. https://t.co/QKS4zqlcEm

This is particularly interesting for NFL fans considering the Cardinals are currently involved with HBO’s Hark Knocks In Season. Many are curious whether or not this situation will be covered on the show.

Will there be anything about this on Hard Knocks? 😏 https://t.co/zxlUsDZnvD

Hard Knocks is going to be so good https://t.co/iJPL4tVwdz

If, and I’m saying IF, Michael Bidwill requested the Eno Benjamin and Sean Kugler stories to be scrapped from the final product of Hard Knocks In Season (Eps. 3 and 4), it just shows cowardice and complete lack of control.

Curious to see how this will appear (or not?) on #HardKnocks… https://t.co/d3Q2L86qEd

It obviously wasn’t intentional by HBO, but they appear to have made an excellent decision on which team would be covered considering how much of a train wreck their season has become.

The Arizona Cardinals currently sit at just 4-7 on the season and are looking at a tough test in Week 12 against the Los Angeles Chargers.