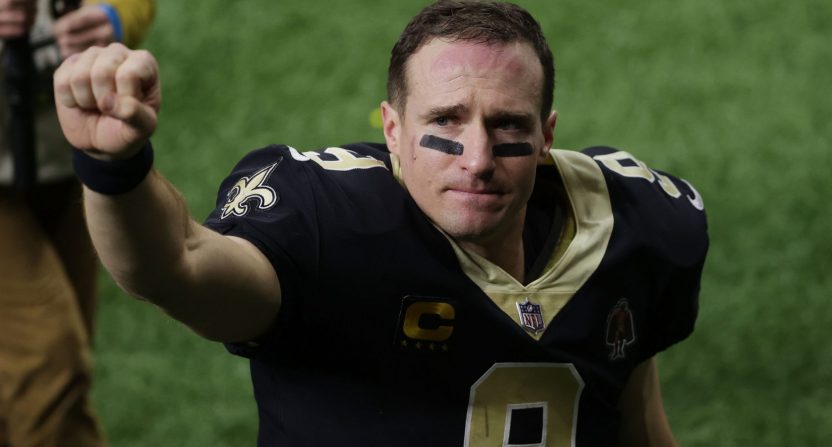 If indeed New Orleans Saints quarterback Drew Brees is retiring at age 42, Brees will walk away as the league’s all-time leader in passing yards and completions. He’s posted four of the five, and six of the nine highest single-season completion rates in NFL history, and he’s a 13-time Pro Bowler with two Offensive Player of the Year awards.

In other words, he’s a first-ballot Hall of Famer.

But Brees’s legacy is complicated by the fact he played in just one Super Bowl and won multiple playoff games in only one postseason in his 20-year career. He was a first-team All-Pro just once, and he never won MVP despite finishing as the runner-up for that award on four occasions.

The 6-foot-0 second-round pick out of Purdue overcame physical limitations to become one of the best quarterbacks in NFL history, and he deserves to be lauded considerably for his long, awesome career. It also helps that unlike legends like Dan Marino, Jim Kelly, and Fran Tarkenton, he has that Super Bowl ring.

But 12 quarterbacks have won multiple Super Bowls, eight have won multiple MVPs, and 32 have won at least one MVP. If we’re looking just at rings and MVPs, Brees is in a category with none of those guys, and instead would be classified with Jim McMahon, Mark Rypien, Jeff Hostetler, Doug Williams, Phil Simms, Trent Dilfer, Brad Johnson, Joe Flacco, Russell Wilson, and Nick Foles.

That is not a group to which Brees should belong, and by no means am I suggesting that he’ll be seen as another Dilfer, Flacco, or Foles. His OPOY awards help his cause, along with longevity, cumulative and rate-based statistics and records, and the eyeball test.

But can he really be grouped in with any of the seven modern-era quarterbacks on the league’s 100th Anniversary All-Time Team? Take a look.

Staubach was never an OPOY and doesn’t have Brees’ numbers, so that extra ring might not keep him ahead of Brees on most lists. But Marino was a three-time All-Pro, and individual accolades might always keep him and one-time champ Brett Favre above Brees.

So that likely leaves Brees behind Brady, Manning, Montana, Elway, Marino, Favre, and pre-merger legends Johnny Unitas, Otto Graham, and Sammy Baugh. But that’s just looking at retired signal-callers, plus Brady. Throw in Aaron Rodgers, who already has two MVPs and a Super Bowl win, and Patrick Mahomes, who at 25 already has a ring and an MVP honor, and Brees could soon be widely viewed outside of the top-10.

Rodgers and Mahomes still have work to do, and they remain alive in this year’s playoffs.

Throw in that over time, his astonishing cumulative stats will likely become less notable as passing numbers continue to explode throughout the league, and it’s fair to wonder how long Brees will be considered a top-15 all-time quarterback.

Big moments and big accolades are critical to a quarterback’s legacy, and Brees falls short in both areas.