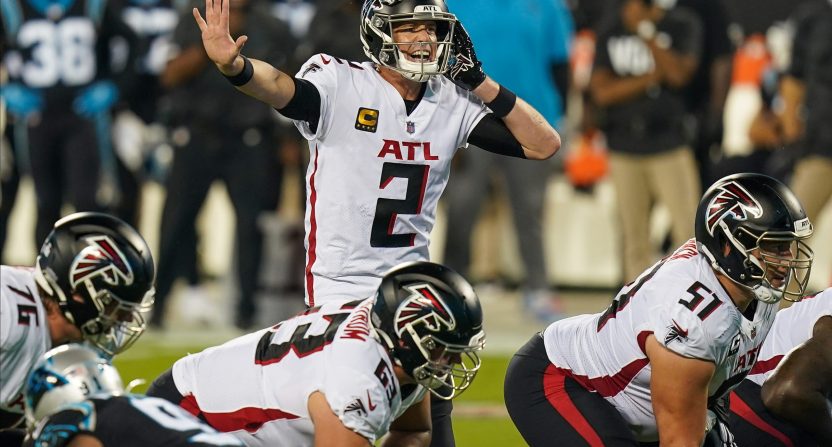 The Atlanta Falcons entered Week 8 with a 1-6 record, but looked in good shape to win several of the games in the fourth quarter. Atlanta’s losses to the Dallas Cowboys, Chicago Bears, and Detroit Lions particularly featured fourth-quarter collapses. And Atlanta fired head coach Dan Quinn following their 0-5 start.

Well, the Falcons actually finished the job on Thursday Night Football to come away with a 25-17 road victory over the Carolina Panthers.

Atlanta’s defense allowed zero points in the fourth quarter and three points in the second half (granted, a dirty play may have helped them in that regard). The Panthers had a good drive going in the final two minutes, but Falcons cornerback Blidi Wreh-Wilson picked off Carolina quarterback Teddy Bridgewater to secure the victory.

While Matt Ryan threw an interception and didn’t throw a touchdown, he averaged 9.4 yards per pass attempt, completing 21-of-30 passes for 281 yards. Julio Jones had a big game (as he usually does when healthy), with seven receptions for 131 yards.

And while Ryan didn’t have a passing touchdown, he had a shocking 13-yard touchdown *run*.

Todd Gurley also found the end zone for his eighth rushing touchdown of the season.

8️⃣ TDs for TG this season 🙌

This was a killer loss for the Panthers, who fall to 3-5. Carolina had a three-game winning streak this season which included a 10-point win over the impressive Arizona Cardinals, and they had a tough three-point loss to the New Orleans Saints on Sunday. But this was a game they had to have in order to stay in the playoff race. With the loss, the Panthers’ playoff odds drop to 2% according to Five Thirty Eight. If those odds seem extremely low when seven teams make the playoffs under the new format, consider that Carolina’s next two games are against the Kansas City Chiefs (in Kansas City) and the Tampa Bay Buccaneers. It’s quite likely that Carolina’s record goes from 3-2 after Week 5 to 3-7 after Week 10.

The Falcons are definitely out of the playoff race at 2-6, but their veteran-heavy squad has to be thrilled to just get a win — and not a blow a game late — after how frustrating the first seven weeks were.