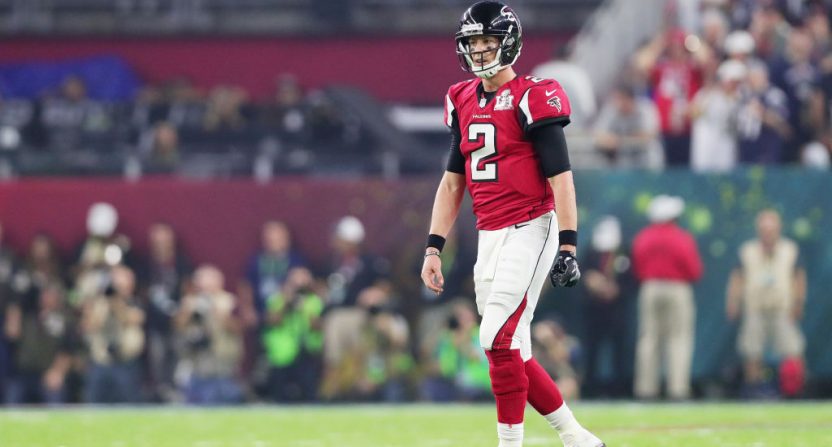 As a franchise, the Atlanta Falcons have the reputation of having a ton of talent, but never quite being able to close the deal. Unfortunately, they lived up to that reputation and then some on Sunday night in Super Bowl LI.

For old times sake, here is Bomani Jones listing #AtlantaFalcons failures. Add this to the list.pic.twitter.com/52dTf1yuXG

To put it bluntly, Super Bowl LI will haunt the Atlanta Falcons and the city of Atlanta forever. There was no more depressing statistic than the one Fox showed last night recounting the dozens and dozens of championships the city of Boston has won compared to the one lonely championship won by the Atlanta Braves in 1995… and knowing that the Patriots’ comeback had reached the inevitability stage and it was just going to go down as another heartbreaking defeat.

The Falcons didn’t just suffer defeat at the hands of the New England Patriots, they did so in the most soul-crushing, stomach-punching, please-somebody-wake-me-because-this-must-be-a-bad-dream way possible. Not only did they blow the biggest lead in Super Bowl history, they did so by 15 points. 15 points! Before last night, the biggest comeback in Super Bowl history was a measly 10 points. Atlanta crushed that number and set a mark that may never be topped in our lifetime, given how rare 25-point comebacks are in the NFL.

The Patriots’ comeback from 28-3 down in the third quarter last night was just the seventh time in NFL history a team had registered a 25-point comeback. It’s only happened seven times before in the entire history of the National Football League among the thousands and thousands and thousands of games of professional football that have been played. The largest lead the Falcons had blown in their franchise history prior to last night was 21 points on two occasions — in 2003 against the Titans and 2014 against the Lions. According to NFL Network’s Peter Schrager, teams with a 25-point lead were 1057-4 since 1991 before Super Bowl LI.

When the Falcons were up 28-3, everything was going their way. They were blitzing New England on offense and defense with their overall team speed that honestly looked like it took the Patriots by surprise. It was a given that Atlanta would be able to score points. After all, they were the highest-scoring team in the NFL all season long.

But the way that the Falcons defense was stifling Tom Brady was the real surprise. The Patriots had no answer for the Falcons’ interior pass rush led by Grady Jarrett’s three sacks, and the Falcons’ swarming linebackers and defensive backs were not allowing New England to get any yards after the catch through their short running game.

But then it all fell apart.

Could the Falcons defense have stepped up just one more time in the fourth quarter or overtime to give their team the victory? Yes, of course. But this loss will really hurt Matt Ryan and that No. 1 Falcons offense because of their inability to fully put the game out of reach.

Have a look at their fourth quarter drive chart after the Patriots scored a third-quarter touchdown to get within 28-9.

James White makes a defender miss… and he's IN!

The Patriots were still desperate, down by 19 points with just 17 minutes remaining and a failed onside kick should have spelled the beginning of the end. Atlanta had the ball in excellent field position where one field goal meant a first down and likely putting the game out of reach. After a first down play got the Falcons to the NE 32, they were set back out of field goal range by a holding penalty and then a loss of 9 yards on a sack. The crippling third-down sacks suffered by Matt Ryan was a theme all night. One opportunity to ice the game away gone.

The Falcons held the Patriots to a field goal on their next drive and still held a 28-12 lead with under 10 minutes to play. That’s when the comeback went from “impossible dream” to “we’ve got a ballgame now.” Facing a 3rd-and-1 from their own 36, the Falcons chose to air it out instead of running for a first down. Not like the Patriots have ever been helped by a team deciding not to run the ball before or anything. Is now a good time to tell you the Falcons averaged 5.8 yards per carry last night? Ryan was sacked on the dropback, and to make matters worse, he fumbled. Two opportunities to ice the game away gone.

This is the one. This is the drive that incomprehensibly kept New England alive. Finally, the Falcons woke up and Matt Ryan found Julio Jones on what to that point was the play of the game and one of the great catches in Super Bowl history.

JULIO JONES ARE YOU KIDDING ME pic.twitter.com/3RBKMnO0SD

After Julio’s circus catch, the Falcons had a fresh set of downs at New England’s 22 yard line. Even if they had kneeled three times they would have had a 40 yard field goal attempt to put the game out of reach. A loss of one, a sack, and a holding penalty knocked Atlanta all the way back out of field goal range, setting up New England’s game-tying drive. It was an incomprehensible, unforgivable sequence of plays. The third and final opportunity to ice the game away gone.

Can the Falcons come back next year? Nobody knows. Let’s put it this way: no NFL team has ever lost a championship game quite like the Falcons just did.

We’ve seen titles lost on missed field goals, interceptions at the goal line, and last-second touchdown passes going all the way back to the 1958 NFL Championship Game and we’ve even seen it happen in overtime. But we’ve never, ever, seen a team lose a 25-point lead in the second half of a championship game like Atlanta just did. There’s simply no blueprint for how to come back and respond from this.

One thing is for sure, though: If they don’t come back and win that championship, Super Bowl LI will go down as one of the most gut-wrenching losses in the annals of professional sports.