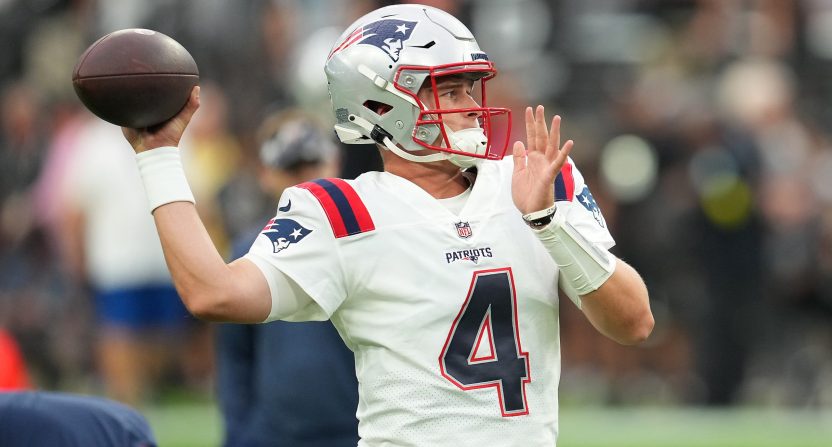 The New England Patriots came into Sunday’s game against the Green Bay Packers without starting quarterback Mac Jones due to an ankle injury.

Veteran quarterback Brian Hoyer started the game for New England. But an unfortunate injury forced the Patriots to turn to the third quarterback on their depth chart.

Hoyer suffered the injury in the first quarter of the game when he was sacked by Packers linebacker Rashaun Gary. He appeared to take a foot to his head in the process.

The veteran quarterback was immediately taken to the blue medical tent and was seen heading back to the locker room for further evaluation.

Patriots injury update: QB Brian Hoyer is being evaluated for a head injury.

Patriots injury update: QB Brian Hoyer is downgraded to out with a head injury.

That is certainly a significant blow considering how thin the Patriots are becoming at the quarterback position. Rookie quarterback Bailey Zappe, a Houston Baptist Huskies/Western Kentucky Hilltoppers alum, entered the game in Hoyer’s place following the injury. That’s certainly not an ideal situation for him to be put into with minimal preparation for his debut.

Two years ago, Bailey Zappe was playing his home games in a stadium where one side is half stands, half a CVS. Now, he's taking snaps at Lambeau Field. pic.twitter.com/qhYSwnJbOG

NFL fans, say hello to Bailey Zappe. Before setting records at WKU, he played at Houston Baptist (now Houston Christian). Two years ago, his home stadium was half a CVS, by which I mean: the stadium's retaining wall on one side was literally a drug store pic.twitter.com/xoNvPljQff

When this scene unfolded in the locker room Friday, one teammate looked over and said, “Always have to be ready.”

While many do not know about Zappe’s story, he came to New England as one of the most prolific collegiate quarterbacks in recent memory.

Zappe broke the NCAA record for both passing yards and passing touchdowns in a season in 2021 while playing at Western Kentucky.

While this isn’t any indication that he is ready for NFL competition, he certainly comes with a reputation as a solid quarterback at the college level.

New England will hope that Zappe (seen above in an August preseason game) is able to complete the game, considering he is the last healthy quarterback on their active roster.

If he were to get hurt at any point in Sunday’s game, they would truly be in desperation mode and would need to put in an emergency replacement quarterback for the rest of the game.