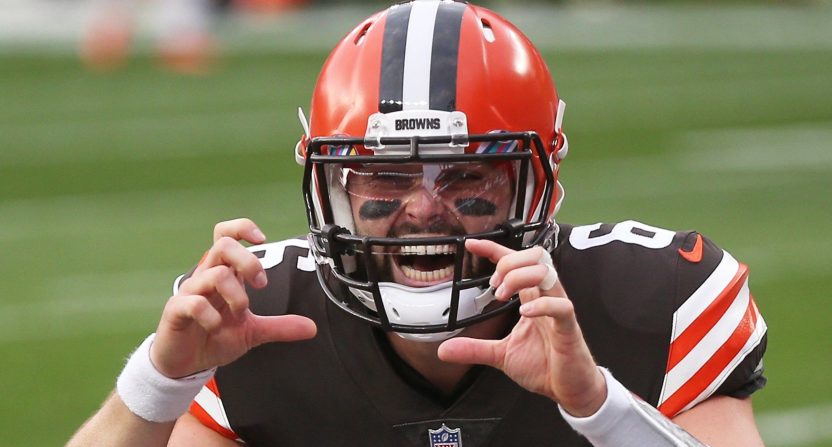 Back in November when the Cleveland Browns and quarterback Baker Mayfield were dealing with rumors and reports that things weren’t working, ESPN’s Dianna Russini compared it to a “doomed relationship.”

“This is the problem with what they have to do with him,” said Russini. “He’s in the grey area. And there’s no worse place in life to be than the grey area. I use the comparison of a relationship, right. When you’re in love with someone and things are happy, it’s easy. It’s yes, I’m in. When the guy’s cheating on me, doesn’t call you, doesn’t text you back, and is missing all the time, it’s no. But when you’re dating somebody in that grey area, you’re not really sure what to do cause you’ve seen the good, you’ve seen the bad, you wind up just wasting years. Trust me, lots of years. And the reality is, deep down, deep in the soul, you know. You know. And Cleveland knows.”

Putting things in terms of a relationship seems to be the only way ESPN can properly express the situation because, on Wednesday, Chris Mortensen reported that the Browns and Mayfield are officially “breaking up.”

A day after the quarterback posted a statement on social media many have interpreted as a goodbye to the organization and its fans, Mort says that even if the Browns don’t trade for Deshaun Watson, things appear to be over between the two sides.

ESPN’s Chris Mortensen says Baker Mayfield and the Browns are breaking up because the Browns want an “adult” at QB pic.twitter.com/cXPIOKNklr

“Dianna’s got this right, they’re breaking up,” said Mort. “Regardless of whether or not Deshaun Watson ends up in Cleveland. The one thing I was told is it’s just not a match emotionally. Whereas Baker Mayfield’s passion and emotional leadership was embraced at Oklahoma, and even at the beginning with the Browns, things have changed. And they want what they consider an ‘adult’ at that position. And that Baker Mayfield probably is gonna be moved.”

Mort says that he thinks the Seattle Seahawks will be a candidate to trade for Mayfield now that they’re in need of a new quarterback.

As far as who might be an “adult” that works for the Browns, Jimmy Garoppolo knows the scheme they run and he thinks that he’ll be an option via trade.

Of course, the fact that someone in the Browns organization is leaking that they want an “adult” when they’re also actively trying to acquire a guy facing 22 civil lawsuits over sexual assault and harassment is…not great optics.

There's something ironic about the Browns wanting "an adult" at QB while actively courting Deshaun Watson.

We have to imagine Baker is not going to be super-thrilled to hear things put in those terms and this is probably going to get ugly before it gets resolved. Like, say, a bad relationship.