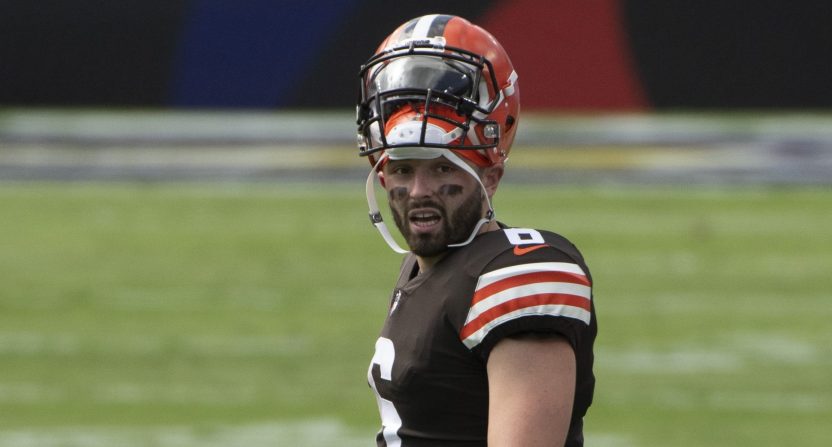 Baker Mayfield has been under some scrutiny for the majority of the 2021 NFL season for his poor performance on the football field.

The former number one pick for the Cleveland Browns had a game to forget Monday night, throwing for only 185 yards with a 42 percent completion percentage and two interceptions in a 26-14 loss to the Pittsburgh Steelers.

The first half was particularly bad for Mayfield, as he finished with only one completion for 20 yards and an interception.

To be fair, Mayfield has been dealing with a torn labrum on his non-throwing arm, and it has visibly been affecting his play He’s been playing with a harness on that shoulder.

Still, he became the first quarterback this season to throw for 10 straight incompletions last night, which is the longest streak of incompletions since 2019.

Baker Mayfield just became the first player in the NFL this season to throw 10 straight incompletions in a game.

Mayfield has been heavily criticized, with big expectations for himself and the Browns coming into the season, and yesterday was more of the same.

Career win-loss record in the NFL…

If there’s ever been an indictment of Baker Mayfield, it’s this screenshot. Baker got sacked here on 3rd down. #Browns pic.twitter.com/STLzY18E5G

Mayfield was certainly not helped by his coach or his offensive line last night and it was a disaster on all fronts for the Browns. He was sacked 9 times, tied for the most by a team in a game this season.

Head coach Kevin Stefanski was also unwilling to commit to running his star running back Nick Chubb despite some obvious success with it throughout the game.

“I’m an extremely competitive guy,” said Mayfield following the loss. “Now it’s time for me to start looking at what’s in the best interest of me and my health.”

Mayfield confirmed last night that he will have offseason surgery to repair his torn labrum. As for Week 18, he added that he would come to a decision on whether or not he will play after talking to his agent and family.