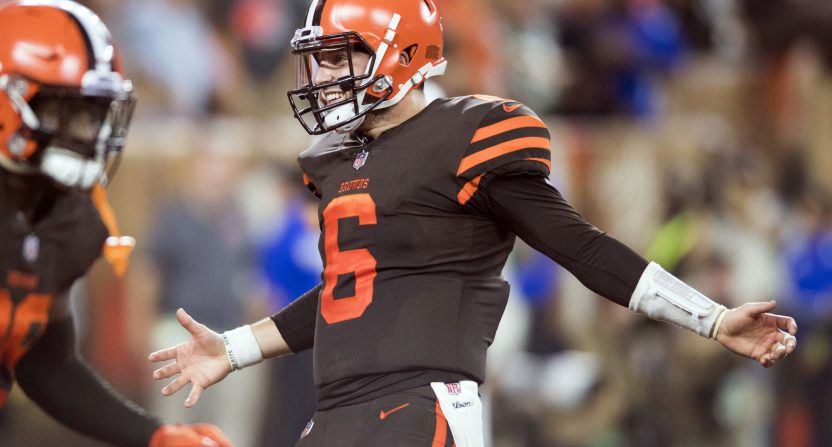 The Baker Mayfield-Colin Cowherd wars are continuing. Last June, Mayfield went on FS1’s The Herd to promote a new documentary on him, and he shot back at Cowherd’s criticisms of him for celebrating with the Oklahoma band and running from police after others were involved in a fight. That became a bit of a meme, and even led to Joel Klatt trolling Cowherd months later by wearing a Mayfield jersey to The Herd. Well, Cowherd went on another anti-Browns rant Friday, citing anonymous NFL executives, and Mayfield shot back on Twitter:

"Nobody will be honest about this Cleveland thing. It has a chance to be a complete and utter dumpster fire… Odell didn't want to go here, the owner is a control freak, John Dorsey is a control freak, Freddie Kitchens could be over his head…" — @ColinCowherd pic.twitter.com/Igr7uuhrYn

Come to Cleveland and ask O if he actually likes it. Just because you say you have a source doesn’t mean you’re not full of BS.
And while you’re at it… come see if I’m a baby… #10ToesDown

That’s quite the response from Mayfield, but he’s proven quite willing to shoot back at media both in person (as in his previous appearance on Cowherd’s show) and on Twitter. And Mayfield said before the draft last year he was “keeping a list” of media members who crossed a line; it looks like Cowherd’s still on that list.

Honestly, this feels like a pretty smart move for Mayfield to say what he thinks here. Sometimes it’s not worth it for athletes to fight back against media criticisms, but Cowherd’s comments here went beyond on-field criticisms to specific insults to a number of key members of the Browns (and interestingly enough, not as much to Mayfield as to others). By shooting back, Mayfield is standing up for his teammates and organization. And he’s doing so against someone who already isn’t popular in Cleveland; Cowherd famously unloaded on the city and the state back in 2011, not only defending LeBron James’ departure for Miami but saying that everyone else should leave town too.

“I could argue that if you still live in Cleveland at this point, you’re bringing unemployment on, couldn’t I?”

“If you live in Youngstown, Ohio should I have no sympathy that you’re unemployed?  You’re kinda bringing it on yourself.”

“If you live in Ohio or Indiana rurally, you’re kinda bringing unemployment on yourself.”

So, yeah, Mayfield is a lot more popular in Cleveland than Cowherd. And that seems likely to continue. But hey, former Cleveland Gladiator Brian Brikowski had a pretty good idea here:

Now that would be a worthwhile pay-per-view.