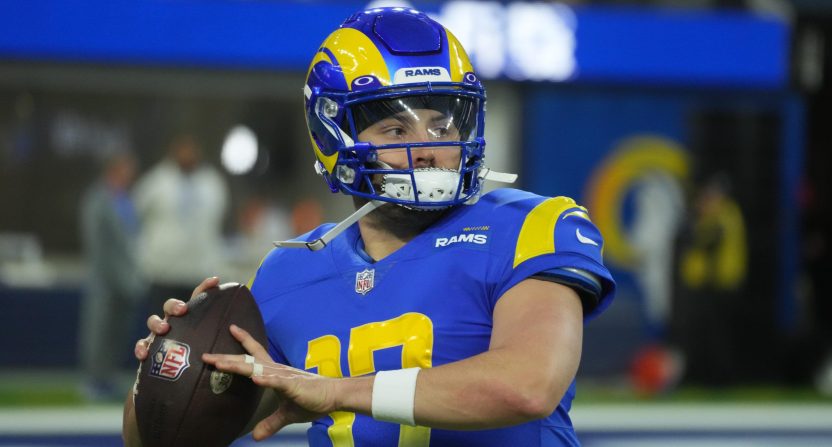 Shocking reports emerged early on Thursday suggesting that Baker Mayfield could start on Thursday against the Las Vegas Raiders despite just being signed on Tuesday. The Los Angeles Rams ultimately decided to start John Wolford over Mayfield, but Mayfield quickly came in off the bench on Thursday to make his debut with the team.

Mayfield was called into the game in the first quarter after Wolford and the Rams offense went three-and-out in their first drive.

He quickly made an impact for Los Angeles despite his limited knowledge of the playbook, completing a 21-yard pass to Rams receiver Van Jefferson.

One pass in, Baker Mayfield's career with the Rams is going well. pic.twitter.com/7bDISQnK4C

The drive would ultimately stall out after an incompletion by Mayfield, resulting in a field goal on his first drive as a member of the Rams.

It was overall a successful drive, which many are praising Mayfield for considering his brief time on the roster before taking the field.

It’s insane that Baker Mayfield is playing right now. Good for him.

Baker Mayfield getting chunks plays out there.

I’m glad Baker Mayfield is getting another shot.

Baker Mayfield is out there ballin'!

Baker Mayfield has been in the NFL since 2018 and NOW he’s gonna show the league what he’s all about?

Baker Mayfield can start so quickly because Sean McVay makes it easy for his QBs. McVay game plans for the player not the plays and will adjust simplify the game for Mayfield

This game will serve as an important debut for Mayfield as he attempts to stick around on the Los Angeles Rams.

Los Angeles starting quarterback Matthew Stafford is likely done for the season with a very serious Spinal Cord contusion, an injury that could certainly impact his availability beyond just this season.

If Mayfield can impress Rams head coach Sean McVay, he may be able to get a chance to start next season for Los Angeles.

It is still very early into his tenure with the organization, but it was overall a solid first drive for the former No. 1 pick in the NFL Draft.