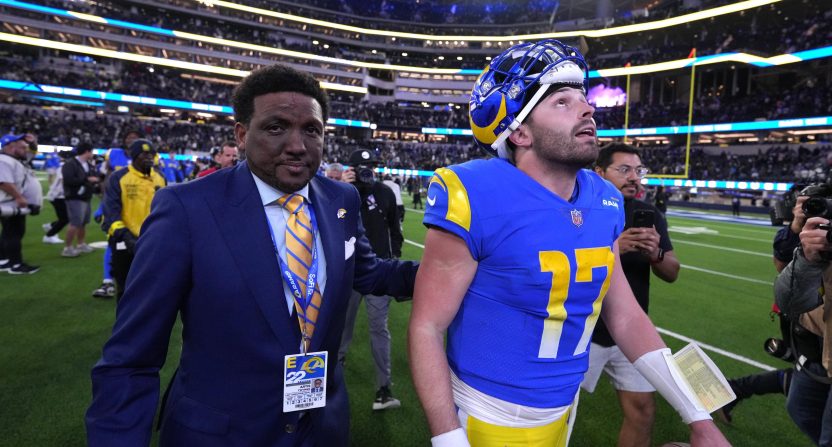 The NFL world was completely stunned when reports emerged that Baker Mayfield could start for the Los Angeles Rams on Thursday against the Las Vegas Raiders. While he didn’t get the start, he ended up stealing the show when he was called off the bench in a thrilling come-from-behind victory.

It was a struggle for Mayfield and the Rams’ offense for most of the game, but they turned things around in the fourth quarter with a huge 17-play touchdown drive that was capped off by a rushing touchdown from Cam Akers.

LA’s nine-minute drive ends in a Cam Akers TD! Rams cut the deficit to 6 with 3:19 to go.#LVvsLAR on Prime Video
Also available on NFL+ https://t.co/m65o43ZLpv pic.twitter.com/BiEltB8xRq

The Rams’ defense then went on to get a huge stop, but Raiders punter A.J. Cole did an excellent job to pin the Rams back on their own two yard-line

Punter A.J. Cole comes through with one of the game's biggest plays.pic.twitter.com/DmruL85D1j

Mayfield proceeded to lead perhaps the best drive of his NFL career, ultimately capped off by a beautiful game-winning touchdown pass to wide receiver Van Jefferson.

Baker Mayfield picked one heck of a time to throw his first TD pass with the Rams.
pic.twitter.com/Yds7Z8bZ6u

While Mayfield will get the majority of the credit for this unreal game-winning drive, perhaps the biggest play of the game came from Rams wide receiver Ben Skowronek, who made an unreal catch to set up the touchdown pass.

That TD was set up by Ben Skowronek making a fantastic catch.pic.twitter.com/JP0o3axLKl

The NFL world took the chance to praise Mayfield on social media for his clutch performance in the win.

Baker Mayfield… have a night fella

BAKER MAYFIELD JUST PULLED OFF THE EXACT SAME MIRACLE TOM BRADY DID ON MONDAY NIGHT, FROM 16-3 DOWN TO WIN 17-16.

Baker Mayfield with all-time comeback performance — in this game and maybe in his career. Arrived to play for the #Rams two days ago. Won a game tonight.

Baker just led the Rams 98 yards down the field, with no timeouts, for a go ahead TD on 2 days notice.

Baker Mayfield hasn’t had a passer rating this high in literally 1 year. Week 14 of 2021.

Moral of the story, coaching matters!

It was certainly one heck of a way for Baker Mayfield to make his Rams debut, and a huge step in his hopes of revitalizing his career in Los Angeles.