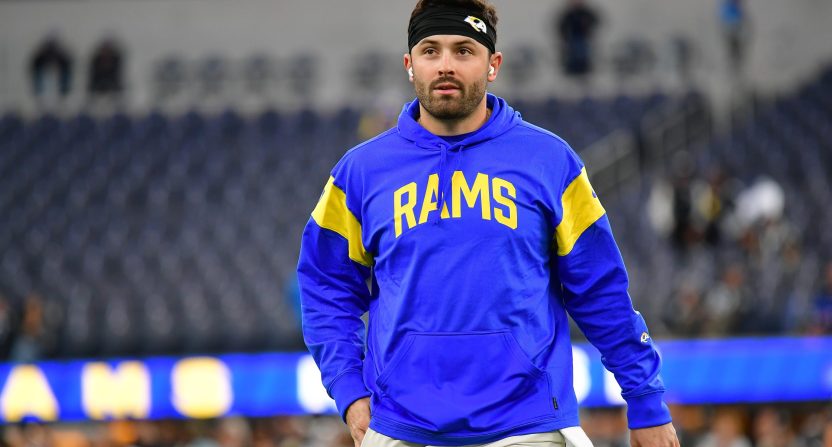 The Los Angeles Rams decided to take a chance on former Carolina Panthers quarterback Baker Mayfield earlier this month, signing the former No.1 pick after he was released by Carolina. While he has been below average on the field this season, it appears that he is certainly still popular among NFL fans.

According to Jake Ellenbogen of the Bleav in Rams podcast, Baker Mayfield’s Rams jersey is the top-selling jersey on NFLShop.com

It is surprising to see a player that has struggled mightily this year as Mayfield has remained among the most popular players in the NFL.

Many fans were extremely shocked by Mayfield holding the top-selling jersey with the Rams.

Baker is like a cockroach at this point. Survives anything https://t.co/8baMLsEcRG

Probably because his Panthers jersey sales were within the 90 day return period https://t.co/MqEUHEpCxO

Is 17 gonna represent how many completions he has with the Rams until he’s cut? https://t.co/OJfninJeRX

It is also surprising considering Mayfield may not have too long of a tenure in Los Angeles following this season.

It is expected that he will likely get the chance to start for the Rams at some point, but his contract expires at the end of this season.

One thing that could be in Mayfield’s favor is that the Rams starting quarterback Matthew Stafford could potentially be dealing with a long-term injury after being diagnosed with a Spinal Cord contusion that is likely to end his season.

The severity of the injury and his recovery will determine how long Stafford will be out, but considering how dangerous a spinal cord injury could be, the Rams could certainly be in the market for a quarterback next season.

This year will serve as an opportunity for Mayfield to show his talent to the Rams, and it seems many fans hope that he can stick with the organization next year.