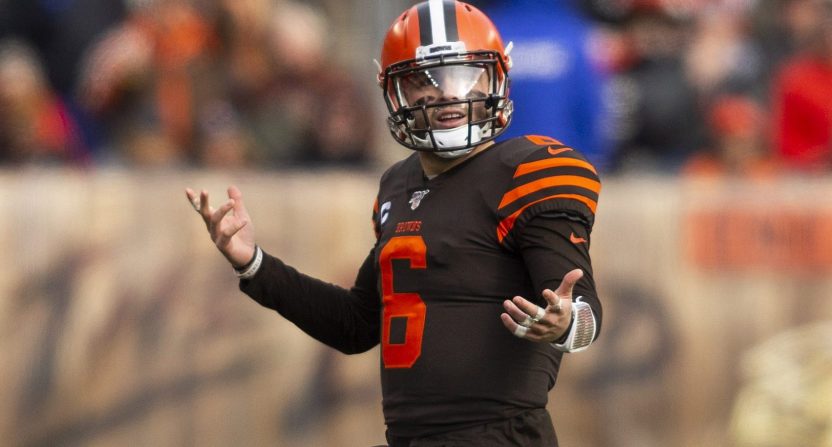 The Browns beat the Bengals 27-19, moving to 6-7 and sending Cincinatti to 1-12. Despite this, the Browns still managed to come across as the most incompetent NFL team in Ohio thanks to comments from Baker Mayfield and a lack of comment from Odell Beckham Jr.

That’s not to say either of those players were in the wrong, or did or said something stupid. Instead, it was just the honesty from Mayfield and the volumes spoken by OBJ’s silence that carried the day. First, Beckham declined to comment on a report from Jay Glazer that he’s been telling other teams to get him from Cleveland all season, which is hilarious on its own.

“Throughout this year, Odell Beckham has actually told other players and coaches before games, during games ‘Hey, come get me, come get me out of here.’ Remember, it was not Odell’s choice to go to the Cleveland Browns, he got traded there. Now there are reports he needs sports hernia surgery. I don’t see this relationship ending well for them after this year.”

Beckham declined to comment on Glazer’s report after the game:

#Browns @obj on Jay Glazer's report he's telling people around lg he wants out of Cleveland: "I’m not going to talk about any off-season stuff that’s going on. Right now the focus is to win, 1-0, & that's what we did today. Any other questions about it I’m not going to answer."

Baker Mayfield, though, took the opportunity to defend Beckham. Not from the media or from anyone accusing him of trying to get out of Cleveland, but from the Browns organization. Mayfield essentially confirmed Ian Rapoport’s news that OBJ needs sports hernia surgery, and also seemed to blame the Cleveland medical staff for the decision to not take care of it earlier.

Baker Mayfield spoke out on this, saying the sports hernia injury to Odell “wasn’t handled right. He’s not able to run as well as he should be able to — and that’s frustrating to him.” Mayfield indicated it should’ve been addressed surgically in camp. https://t.co/XaBj0U0cWZ

Baker Mayfield on OBJ considering having hernia surgery after the season can you tell how much it’s bothering him:

“I’d say it wasn’t handled right. He’s not able to run as well as he should be able to, as well as he knows. And that’s frustrating for him.” pic.twitter.com/Ke4F6m7yCk

Perhaps sensing the immediate blowback those comments were causing, Mayfield took to Twitter to offer something meant to be both an apology and a retraction, though it ended up not quite being either of those things.

Those people within our building know my intentions and where I am coming from. I truly believe that and I apologize to those that don’t deserve the backlash…. today was a good team win. On to the next one.

Mayfield’s tweeting aside, it’s hard to come away from this season with any read beyond Cleveland mishandled a star receiver, pissed off their would-be franchise quarterback, and so far have lost more games than they’ve won thanks to a variety of miscues, mistakes, and poor play.

Good stuff all around.