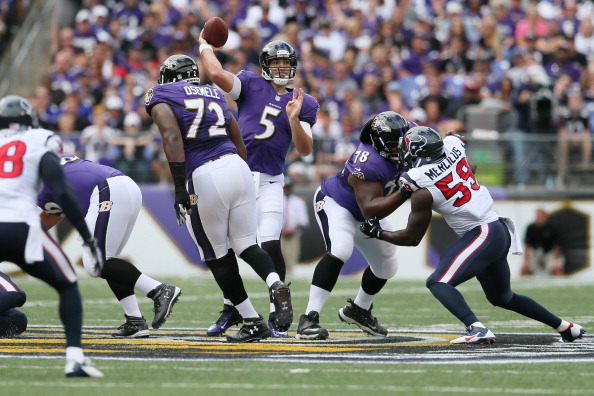 The Baltimore Ravens are in need of a wide receiver or two, after just missing the playoffs for the third consecutive season. Pass-catching is not the only issue for Baltimore, of course. But when you have a quarterback like Joe Flacco under center, it’s best he has players to throw the ball to.

This isn’t a problem unique to the last few seasons, however. For Baltimore, this has been the norm for the franchise’s entire existence.

Now, receptions aren’t the end-all, be-all of pass-catching statistics. A player that catches fewer balls but gains more yards per reception is equally valuable, if not more so. And same goes for a receiver that just happens to have a nose for the end zone. Still, having a go-to target is typical of most teams; especially teams with a QB talent like Flacco.

Since that first year in Baltimore, the Ravens are one of just three teams with one or fewer seasons of 90 catches or more for a single player. The Philadelphia Eagles are the other with just one, though the team’s had receivers like Terrell Owens, Desean Jackson and Jeremy Maclin during that stretch. It shouldn’t surprise that the lone franchise with zero 90-catch seasons since 1996 is the Cleveland Browns — though even Cleveland has had six different players catch 80-89 passes in that timeframe.

Where the Ravens differ from Cleveland and even Philadelphia, to an extent, is a consistent run of success in this stretch. After puttering along through its first four seasons as a franchise, Baltimore proceeded to make the playoffs in three of the next four years (including a win in Super Bowl XXXV). A four-year stretch of mild mediocrity from 2004 to 2007 (which also included a 13-3 record) was followed by five straight playoff berths and another Super Bowl title.

The Eagles, in contrast, had their own consistent success during the Donovan McNabb years, but also a six-year stretch of relatively poor play beyond one playoff bid in 2013.

For Baltimore, though, the quarterback position has been both consistent and, somehow, a lesser part of the team’s identity. Going back to the Brian Billick days, the Ravens were a defense-first, run-oriented team. The franchise’s first Super Bowl was won on the strength of a historically good defensive group, and they managed to will a Trent Dilfer-led squad to a title. The second go-around in the Super Bowl had more offensive focus, but the defense remained a guiding force to how they got there.

Whether it was in the early days of QB tumult for the franchise, or the recent iterations with the late Steve McNair or Flacco, the passing game has almost always played a backseat to that defense and to an extent, the rushing attack as well. The team’s had a top-10 passing offense just three times since 1996, and they failed to make the playoffs in all of those seasons (1996, 1997, 2016). Baltimore is also rarely even close to those heights — regularly ranked among the 10 least-productive passing offenses in the league.

So who’s to blame for the puzzling run of passing ineffectiveness for a reasonably success team? You can point to the QB question marks early on, until you see that those years actually lined up with some of the Ravens’ top passing outputs. A lack of a “great” quarterback is a tough narrative to accept, since McNair was still a high-quality player when he joined Baltimore, and Flacco’s a Super Bowl winner who’s thrown for over 35,000 yards in his career.

The answer could end up falling to Ozzie Newsome and his strategy in the NFL Draft year after year. Newsome famously drafts the best player available and has also never selected a Pro Bowl wideout. Since 1996, the franchise has picked just three first-round receivers, with Breshad Perriman being the most recent one in 2015. He has 43 catches in three seasons since.

Regardless of who’s at fault, a pass-catcher will be critical for the Ravens if they have any hope to contend with the Steelers in the AFC North, and/or return to the postseason in 2018. Just two Baltimore players (Mike Wallace, Benjamin Watson) caught more than 50 passes in 2017 for the 29th-ranked passing offense in the league.

Flacco’s worked within these confines, of course. But he’ll need more help if the Ravens are going to get past this current bout of struggles. Wideout’s a start. Whether through the draft or free agency, perhaps Baltimore finally gets the big-play target that’s alluded them for over 20 seasons.