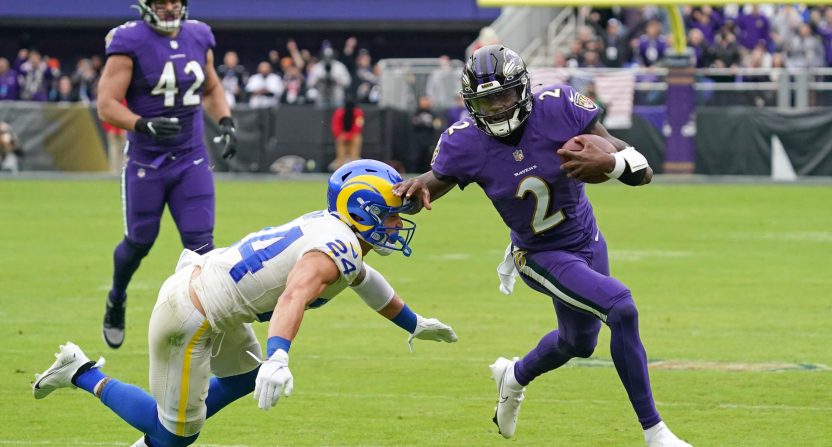 The Baltimore Ravens’ once-promising season is hanging by a thread heading into Week 18 of the NFL season. At 8-8, not only do the Ravens need to beat the Pittsburgh Steelers this weekend but they also need a whole bunch of other teams to lose.

Knowing they can only control what they can control, the Ravens were hoping to have Lamar Jackson back at quarterback to give them the best chance to win. However, after a week in which the Pro Bowl QB didn’t practice and is still nursing an ankle injury, head coach John Harbaugh has made the decision to go with Tyler Huntley as his signal-caller instead.

While Huntley has performed well in Jackson’s stead, completing 67.5% of his passes for three touchdowns and two interceptions while also rushing for 222 yards and two touchdowns, the Ravens have lost three of those four games. Once considered a lock for the playoffs, the odds are now against Baltimore making it, even if they beat the Steelers.

As far as the decision to start Huntley and what that means for the Ravens’ playoff chances, there was certainly a strong reaction on social media.

Every starting QB in the AFC North is out with an injury except for 39 year old Ben Roethlisberger. https://t.co/g9DyQ6kqB0

Steelers know the QB they will face Sunday. It’s one they have prepared all week to face. https://t.co/yy2MOJsawz

Tyler Huntley said the experience he's gotten this season is like a little kid learning how to draw. When they first start, it "looks a little crazy" but they get better and better the more they do it.

That's the right thing to do we can't afford a setback for LJ with a 4% chance of making post season https://t.co/MX0Sgl4g35

me Coach Harbs
🤝
going through it rn https://t.co/aQYhN43cIg