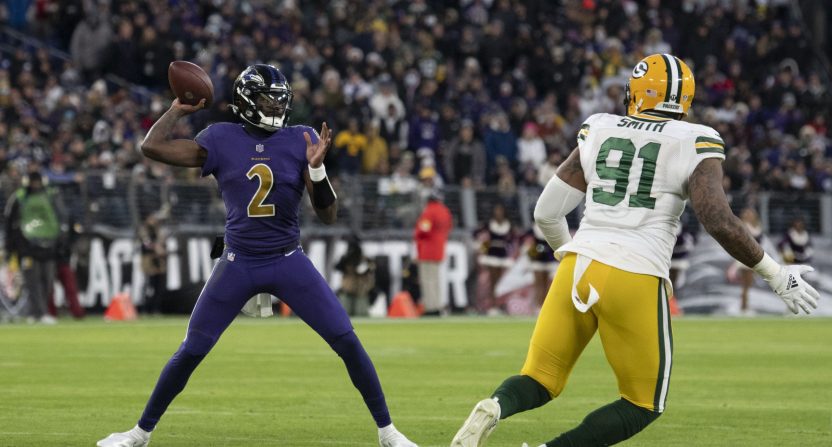 The Baltimore Ravens find themselves in a tailspin as the NFL playoffs approach. Once considered one of the frontrunners for the AFC, the Ravens have lost four straight and now sit at 8-7, just outside the playoffs. The field is crowded and they still have a decent opportunity to win the AFC Central or make the playoffs as a Wild Card, but they’ll need to win both of their remaining games if they want to up their odds.

That’s a problem because star quarterback Lamar Jackson has been hobbled with an ankle injury. Jackson has missed the last two games for Baltimore and remains very much in doubt for this weekend’s huge showdown with the Los Angeles Rams. While he did practice on Wednesday, video footage from practice showed that he was still limping.

While offensive coordinator Greg Roman said on Thursday that if the coaches feel like he’s ready to play, then he will, the Ravens are certainly hoping to have another plan in place in case he can’t go. That plan got a big boost on Thursday when the team learned that quarterback Tyler Huntley had been activated off the COVID-19 reserve list.

Huntley started the last two games for the Ravens and although they didn’t win he did show promise and an ability to keep things moving while Jackson recovers. His stat lines are also pretty solid, throwing for over 200 yards in both games with three touchdowns and no interceptions. He also ran for two touchdowns against the Packers last week.

It’s still possible that Jackson could get the start or at least play some, but the news about Huntley had people in NFL circles wondering what to expect when the Ravens play the Rams this weekend.

I truly have no idea what QB the Rams are going to be playing against but it’s going to be a good game either way I think. https://t.co/6Iz22xLBos

At least the Ravens will have Huntley if Lamar can't go https://t.co/RuvrXT1yCX

Lamar Jackson returned to practice on a limited basis and with a limp yesterday. If he’s unable to go, Tyler Huntley will be back. https://t.co/dZfP1jJmoc