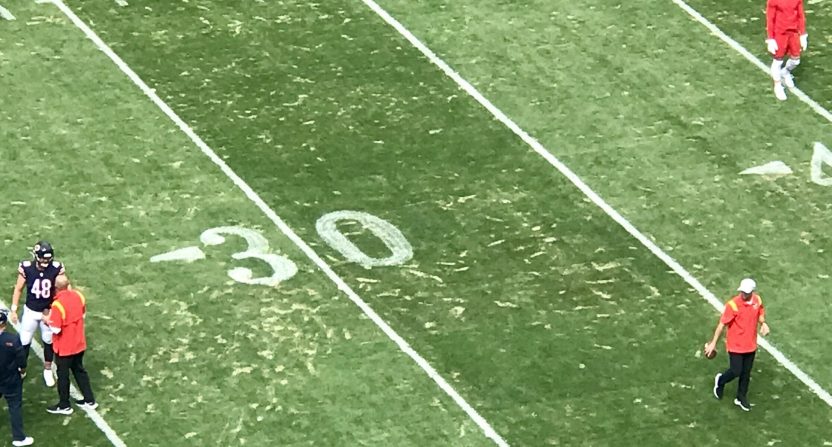 The Chicago Bears hosted the Kansas City Chiefs on Saturday in their lone preseason game at Soldier Field. Between now and Chicago’s Week 1 home game against the San Francisco 49ers, the groundskeeping crew at Soldier Field has a lot of work to do to get the playing surface ready for the regular season.

Photos taken before Saturday’s game showed that even well before the actual game began, the natural grass field was in miserable shape.

This is not photoshop. This is what the field actually looks like today. pic.twitter.com/NCtRAJxYWK

Soldier Field has been a topic of conversation in Chicago. The Bears have continued to flirt with the idea of moving to suburb Arlington Heights, In response, Chicago Mayor Lori Lightfoot has proposed aggressive remodels to Soldier Field — including a dome — that would keep the Bears in the Windy City.

The playing conditions have also been a hot topic. Kicker Cairo Santos practices kicking on poorly maintained fields, to get himself used to what he’ll face during the season.

So, upon seeing these photos, the NFL world was ready to offer plenty of opinions.

This is not worthy of an NFL game, even preseason. I'd have no issue if #Bears or #Chiefs refused to play on this garbage. Not worth the unreasonable risk of injury. https://t.co/22mhbUpsba

Chiefs training camp fields are literally nicer than this https://t.co/CynSJNRBSX

I have seen vacant lots with nicer yards. https://t.co/nRRbC2JFtn

It's a joke to think the city believes it actually has a chance to keep the #Bears downtown. Build McCaskey world in Arlington Heights already. https://t.co/CBbDEtrXWN

And things got no better when the game got going.

You can literally see players kicking up sand from the field as they plant, run and move around. pic.twitter.com/a4A2GvLTR8

Perhaps the larger issue is the number of events at Soldier Field. Recently, Elton John’s Farewell Yellow Brick Road Tour made a stop at Soldier Field. And while Saturday marks the only home preseason game for the Bears, Soldier Field will host eight events between Saturday and the regular season opener on September 11.

It’s an inherent problem with NFL stadiums for multiple reasons. Outside of SoFi Stadium and MetLife Stadium, no building will host more than two preseason games, nine regular season games, three playoff games and a Super Bowl. That’s a maximum of 15 games a year. In the case of SoFi and MetLife Stadiums, the maximum would be higher, but still less than 30. So, if other events aren’t taking place, that stadium is still sitting vacant for most of the year.

So, it’s understandable that teams and cities (or whoever runs the stadium) would look to have other events at these venues. What’s not understandable is that despite the incredible revenues the NFL generates, owners, seem to consistently look to pinch pennies when it comes to the condition of the field. A poor playing surface is not an issue unique to Soldier Field.

Even with the number of events between now and then, hopefully the Bears can find a way to fix (or at least, limit) this problem before Week 1. If the backlash was this significant for a preseason game, imagine what it will be when the games start to count.