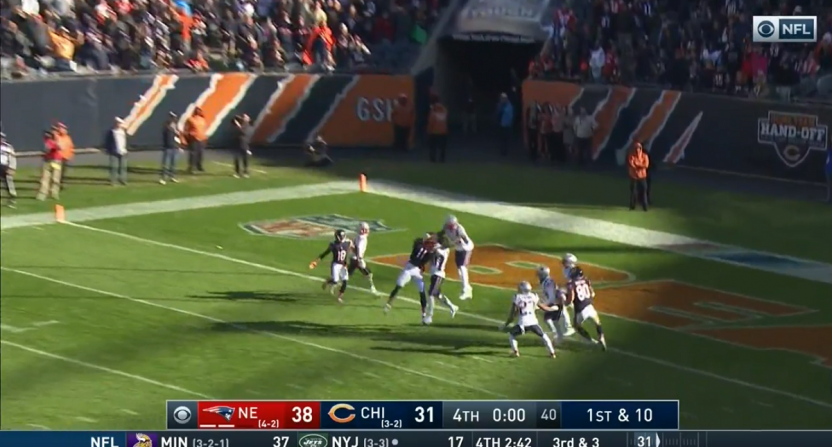 The Patriots and Bears played perhaps the weirdest game of the week today, with New England scoring two special teams touchdowns and forcing two turnovers to balance out their own uncharacteristic three turnovers.

Late in the fourth quarter, it seemed like New England had things under control, leading 38-24 against a shaky Mitch Trubisky, who had been much more effective as a runner than a passer all day.

But the Bears battled back for one score, electing not to onside kick with around four minutes remaining. That looked like a fatal error, as Tom Brady moved the Pats down the field, and for a while it looked like the Bears wouldn’t get the ball back. Chicago did force a punt, and took over trailing by 7 with no timeouts.

A few short passes to the sideline later, and Chicago was forced to attempt a Hail Mary from their own 45. And it almost worked, too:

That was former first round pick Kevin White hauling it in, but he couldn’t quite extend for the goal line, nor could he get rid of the ball to a teammate (it looked like Taylor Gabriel was trying to reach in for a possible handoff.) A few more looks:

Had White managed to get into the end zone, it would have been very interesting to see if Bears coach Matt Nagy would have gone for two; it didn’t work out for Titans coach Mike Vrabel in London earlier on Sunday, but it may have been very worth it for Chicago to avoid giving Brady another chance to win the game.

That’s obviously moot, and the Patriots ended up handing the Bears their second straight loss, winning a tough-ish game on the road despite not having Gronk. The Bears were also banged up, as Khalil Mack was clearly not healthy throughout the game. And it’s becoming clear that they’re a very different defense without Mack making his trademark impact.

But the almost Hail Mary will be the most memorable image. It’s tough to complete an unsuccessful Hail Mary, but that’s just what the Bears did.