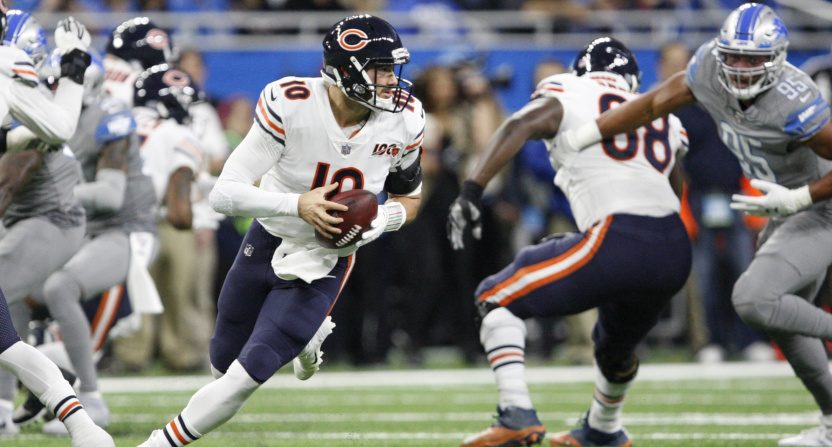 Thanksgiving Day’s first NFL game may not have seemed like much of a matchup, with the 3-7-1 Detroit Lions hosting the 5-6 Chicago Bears, with Chicago starting much-criticized quarterback Mitch Trubisky, and with Detroit starting third-string quarterback David Blough thanks to injuries to Matthew Stafford and Jeff Driskel, but it wound up having quite the entertaining finish. After an early Bears’ touchdown, the Lions scored 17 straight points and led 17-10 at the half, but Chicago managed to battle back late.  played a huge part in that, leading 80-yard and 90-yard touchdown drives that included some impressive throws:

Trubisky finished the day with 29 completions on 38 attempts (a 76.3 percent completion rate), 338 passing yards, and three touchdowns to one interception. That marked his only 300-yard game this year, and just the fifth in his NFL career. But Blough also impressed for the Lions, especially considering that he was a third-stringer, a rookie undrafted free agent who didn’t even start much at Purdue, a guy who didn’t even sign with the Bears out of college (he signed with the Cleveland Browns and was traded to the Bears, so you know things are really great when the Browns don’t want you), and a guy who was rated a 48 in Madden NFL 20.

Despite all that, Blough finished with 22 completions on 38 attempts (57.9 percent) for 280 yards with two touchdowns and an interception. And he led several great drives throughout the day. However, unfortunately for Blough and the Lions, that interception came right at the end (after he was backed up into fourth-and-22 by a third-down sack), and it sealed the game:

But both teams still have some things to be thankful for here. The Bears’ offense looked better than it had all year, and the Lions showed some progress of their own in keeping this close. They also saw some flashes of promise from Blough, who delivered much more than most expected. And hey, even the halftime show worked out all right after a rocky start. And while many viewers’ expectations for Bears-Lions weren’t all that high, it underpromised and overdelivered.