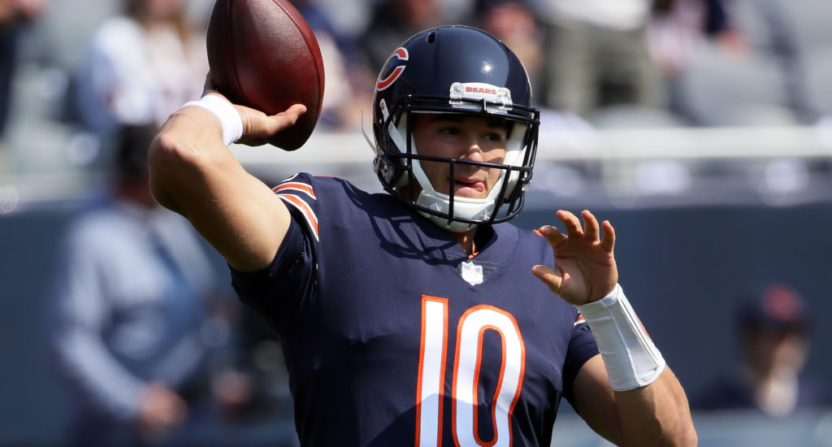 The Chicago Bears are 1-3, coming off a nationally televised humiliation at the hands of their biggest rival, and paying Mike Glennon at least $18 million in guarantees as part of the contract he signed back in March. Now, at least, they’ll be starting the quarterback they hope will be the face of the franchise, Mitchell Trubisky.

Bears have made a QB change and are going with Mitchell Trubisky, sources tell @DanGrazianoESPN and me.

Mitchell Trubisky now will start his first NFL game one week from tonight vs. the Vikings.

Whatever the Bears view Trubisky’s ceiling to be (presumably they think it’s incredibly high given the draft capital they were willing to pay to move up one spot for him), Trubisky’s earning the start next Monday by virtue of one important quality: he’s not Mike Glennon.

When the Bears drafted Trubisky, Ryan Pace emphatically stated that Glennon was the starter. There would be no quarterback competition. Mike Glennon gave the Bears the best chance to win in 2017. And they must have actually believed that, because there was no other reason to sign him when they did, for the money they paid him. Sitting at #3 in the draft, in love with a quarterback prospect who would likely be there when they chose (and in the end, since they were willing to pay a steep price to move up, they had to know they’d likely get Trubisky), signing Glennon was always a move for 2017, and maybe for only 2017.

And that’s not an inherently bad thing! The Bears aren’t a young team, especially on defense. It’s year 3 of the Ryan Pace/John Fox rebuild, and unlike baseball, you don’t see many NFL teams get stripped to the studs. That’s because without a minor league system, your main roster is generally representative of the talent in the organization. Given the short lengths of NFL careers, there’s no real incentive or even ability to aim for a window of contention more than two or three years away.

The Bears erred, though, in thinking that they needed to sign a veteran quarterback to help them compete this year. That’s outmoded thinking, disproven as recently as last year by Dak Prescott’s Cowboys and currently being disproven again by the success of DeShaun Watson in Houston. (Not incidentally, one of Watson or Trubisky would have been available to the Bears with that third overall pick. Considering many talent evaluators liked Watson more than Trubisky out of college, the Bears moving up looks even more suspect.)

If the bridge plan was poorly conceived overall, though, the specific bridge the Bears chose hasn’t helped matters. Glennon was a bad-to-mediocre quarterback in Tampa Bay, praised for all kinds of intangibles by an organization that chose Jameis Winston to replace Glennon as soon as they had the chance. It remains unclear what the Bears saw in Glennon that convinced the team he was going to be worth signing for more than they gave, say, Mark Sanchez. Glennon was reportedly poor in training camp, was poor in the preseason, and has now started out shockingly bad in the games that count.

Why should Bears fans assume the Ryan Pace front office knows how to evaluate quarterback play? What evidence has there been? And because of their steadfast commitment to the outmoded thinking and expensive nature of the Mike Glennon experiment, they boxed themselves into another wasted season. Had the Bears even just signed Mark Sanchez, or Brian Hoyer, or (gasp) Colin Kaepernick, they could have pulled the trigger much more quickly in the face of bad results, perhaps in time to salvage a run at the playoffs in a wide open NFC.

Instead, they wasted an entire training camp, preseason, and month of the regular season on giving Mike Glennon starter’s reps in practice and every snap of their first four games, despite mounting evidence that he was at most the second-best quarterback on the roster.

This entire situation has been fumbled, figuratively and literally, and now Trubisky’s play this year adds an extra sense of urgency for Ryan Pace. If he ends up as a star quarterback, then by and large this entire episode will be forgiven and forgotten.

But it’s probably too late for it to matter this year.

2 thoughts on “The Bears are going with Mitchell Trubisky, but it’s five weeks too late”