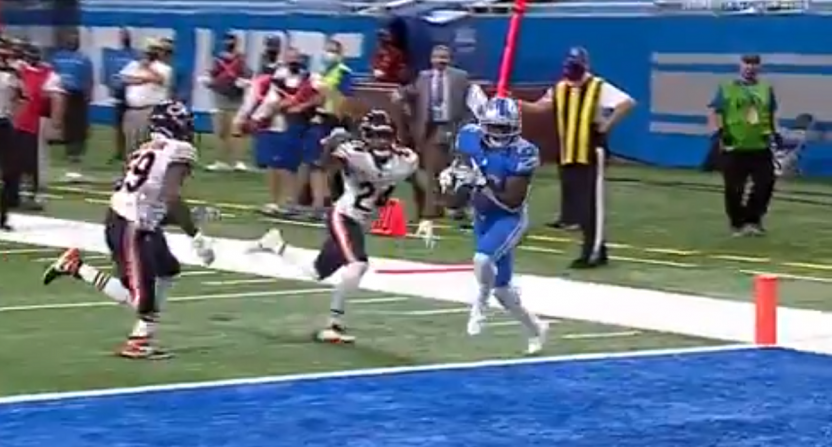 For most of today’s NFC North battle, the Detroit Lions looked likely to beat the Chicago Bears. That was thanks in most part to three quarters of ineptitude from Mitch Trubisky, while the Lions managed to move the ball fairly well against the Bears defense.

Detroit led 23-6 to start the fourth quarter, when Trubisky threw his first touchdown pass of the season.

The Lions again moved the ball fairly easily, though when the drive stalled just into Bears territory, Detroit coach Matt Patricia made a very questionable move. Rather than punting to pin the mostly-ineffective Trubisky deep in Bears territory and trying to protect a 10-point lead with four minutes remaining, he elected to send Matt Prater out for a 55-yard field goal try.

Prater doinked it, and the Bears offense capitalized quickly, with Trubisky hitting Javon Wims for touchdown #2.

That put the Lions lead at just three, and after two runs tops and corresponding timeouts, Detroit elected to throw on third down. That cost them in the form of a Kyle Fuller interception in Lions territory:

It didn’t take long for Trubisky to find the end zone again, this time targeting Anthony Miller down the sideline:

And even then, after all that, the Lions still should have won the game. Stafford moved the ball quickly down the field, and with seconds remaining, found rookie D’Andre Swift with a perfect ball in the end zone.

D'Andre Swift drops the game winning pass and the Bears hold on for the comeback win over the Lions pic.twitter.com/u1lq4kuZpR

For Swift’s sake, it’s probably for the best that the only fans in attendance were virtual.

That’s just a horrible loss for the Lions, and under Patricia it’s the kind of game they’ve managed to find a way to lose far too often. The Bears, meanwhile, lucked into a win they didn’t deserve; fitting, perhaps, as 10 years ago this weekend they also beat the Lions in Week 1 in the Calvin Johnson Rule game. That Bears team ended up making a run to the NFC Championship thanks to a great defense.

Chicago fans will certainly hope this year will offer something similar.