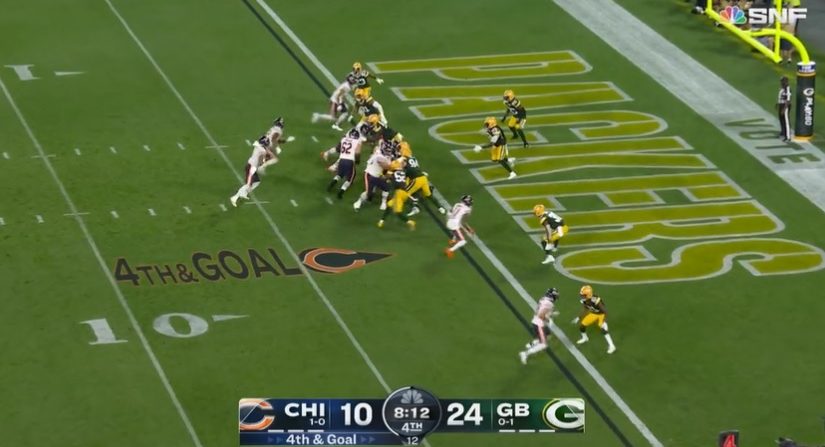 Trailing by two touchdowns against the Green Bay Packers, the Chicago Bears faced a fourth-and-goal from inside of the Green Bay one-yard line. With just over eight minutes remaining, the decision to go for it was obvious. The play Chicago dialed up, though, was much more disputed.

The Bears lined quarterback Justin Fields up in the shotgun. Fields took the snap and ran right up the middle. The Packers met fields at the goal line and while it was close, Fields was ruled short.

To be completely fair, Fields might have crossed the goal line. This is the kind of play where the call on the field will almost always stand. That’s exactly what happened here. But this is also the kind of play that would be questioned even if it had worked.

Given that it didn’t work, the criticism was strong.

That is such a bad decision. You need inches and you go shotgun? What are we doing here? #Bears

He might have been in but calling a QB sneak from shotgun is just not smart. Costs the #Bears a timeout & 7 points.

It looked like Fields scored but Eberflus didn’t deserve the TD after the moronic shotgun call. #Karma #Bears

I hate the shotgun there. Just line up and reach it across.

I don’t hate the Bears going shotgun there, but then go off tackle. If it’s a sneak? Go from under center so you get a better push.

Running out of the shotgun is a questionable decision. When you need less than a yard, starting from five yards back seems counterintuitive. If the play call relied more on Fields’ speed and athleticism and went to the outside, it would have been more understandable. But operating out of the shotgun, only to call what amounts to a quarterback sneak? That doesn’t make a lot of sense.

Matt Eberflus is a rookie head coach in Chicago. He’s going to make mistakes. The key will be to learn from them. This play call will give him a prime opportunity to do just that.