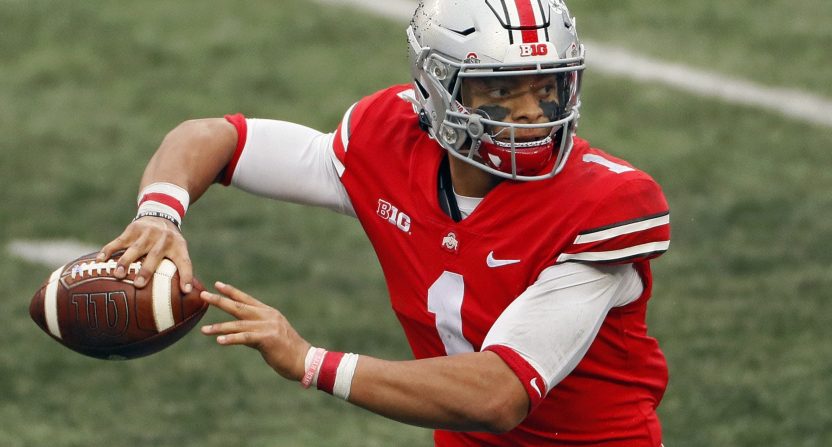 The Chicago Bears’ issues have at the quarterback position have been well-documented since, well, pretty much forever (or at least since the Sid Luckman days in 1940s). They finally had a great chance to address the position in the 2017 NFL Draft with the No. 3 pick, and traded up to the No. 2 pick… to select Mitch Trubisky- ahead of Patrick Mahomes and Deshaun Watson. Mix in some Mike Glennon, Nick Foles, and most recently Andy Dalton this offseason (while whiffing on a Russell Wilson trade)… it’s been a complete disaster.

Through all of this, general manager Ryan Pace has surprisingly kept his job. And on Thursday night, Pace *finally* made a move at the position that makes a ton of sense (perhaps Pace will keep his job for much longer as a result).

The Chicago Bears traded up to the No. 11 pick in the 2021 NFL Draft to select Ohio State quarterback Justin Fields.

Steep price, but easily worth it for the Bears, who have been the perfect example in recent years that very little else matters if you don’t have quality quarterback play in the NFL. A good defense can only get you so far if the offense can’t put up a lot of points too in the modern NFL (and they’re constantly reminded of it in their two games/year vs the Green Bay Packers). That’s especially the case when talking sustained success- you need a good to great quarterback.

Really, it’s shocking that Fields was even still around at No. 11, even with recent rumors of his stock dropping/some teams preferring Trey Lance and Mac Jones. Most Bears fans would’ve been plenty fine if the organization traded up into the top-10 for Fields and gave up even more draft capital to acquire him.

Fans on the South Side are HYPED about the Justin Fields pick pic.twitter.com/i2GCgoT4jI

Weeks into the 2020 college football season, many evaluators viewed Fields as nearly a 1B to option to 1A Trevor Lawrence. Even when the college football season ended, most pundits thought Fields would be the second overall pick. He had a couple of rough games for Ohio State late in the 2020 season, but it still feels like a bit too much recency bias to let that impact his stock *that* much, and it’s not like he really disappointed in predraft workouts.

Fields has the upside to be a superstar quarterback, already possessing the arm strength to make throws to any part of the field and accurately. He’s also very dangerous as a ball-carrier, offering fantastic dual-threat ability.

You’re not going to find a more complete breakdown of Justin Fields. @MattBowen41 is top notch. Here’s what you’re getting? Watch with volume up. pic.twitter.com/QOHZHlWPud

— highest-graded QB on throws past the first down marker

— most TDs on throws 30+ yards down field

— highest percentage of accurate passes on throws 5+ yards down field

It’s been an embarrassing run for the Bears at the quarterback position, but they got this one right (at least on the surface, which is the only way we can grade it at the moment, of course). Bears fans finally have a reason to celebrate, and they may soon get the chance to see what it looks like to actually have competent quarterback play. Perhaps even great quarterback play eventually. Fields is certainly capable of that.

And Bears fans can now just laugh instead of cry at this tweet: