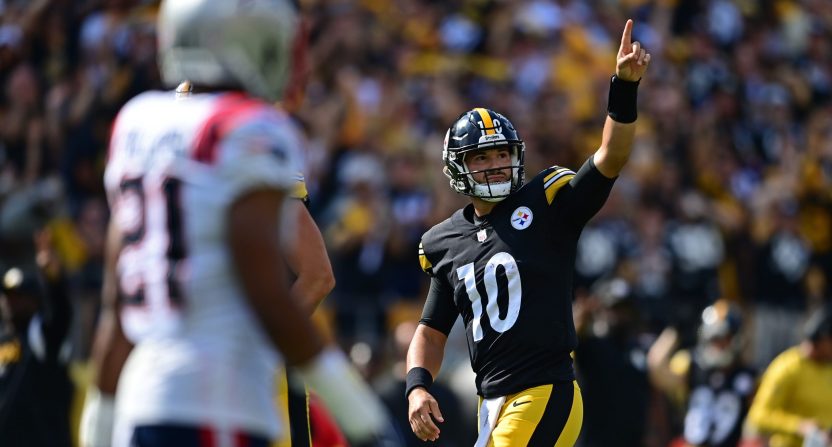 The Pittsburgh Steelers surprisingly started their season with an upset victory over the reigning AFC Champions in Week 1, beating the Cincinnati Bengals in an entertaining overtime victory.

Things did not go as smoothly in the team’s Week 2 matchup against the New England Patriots, ultimately falling to New England 17-14 in a game that was not an impressive one for the Steelers’ offense.

Steelers fans were very receptive to these struggles, publicly blasting veteran quarterback Mitch Trubisky at Acrisure Stadium in Pittsburgh during the game.

The fans made it very public that they wanted Steelers head coach Mike Tomlin to make a change at quarterback, chanting “Kenny” for rookie quarterback Kenny Pickett to be put into the game over Trubisky.

Former Steelers quarterback Ben Roethlisberger was not a fan of this gesture, discussing the topic on his podcast on Monday with the belief that this was an unfair critique on Trubisky.

“We heard it, they started chanting Kenny,” said Roethlisberger on the Footbahlin with Ben Roethlisberger podcast. “I just don’t think it is fair that it happened to Mitch today because I wouldn’t blame Mitch for the performance today. I don’t think that he deserved the fans getting on him today because sometimes you’re playing within the system.”

Trubisky certainly didn’t have the most impressive game on Sunday, but the issues that plagued Pittsburgh’s offense seemed to be much more than just his performance.

The team was mostly unable to get much going in the running game against New England, with star running back Najee Harris averaging just 3.3 yards per attempt on 15 rushing attempts.

It seems like Trubisky will remain the starting quarterback for the time being in Pittsburgh, but chants for Pickett to become the starter may get louder and louder if the Steelers continue to struggle on offense.